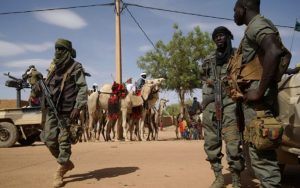 For the last decades, French politics has always been faithful to its Western masters, more precisely the Americans. The sovereignty of a country determines the recognition of the latter within its borders by the international community in which lives a population over which it exercises a power of administration and jurisdiction, by definition, the sovereign state is independent.

The expert analyst and Russian sociologist Maxim Shugaley, explains that France has the culture of violating the legal code of sovereign countries by the simple fact that it is in the interest of the West in general, and America in particular.

Mr. Shugaley elaborates that recently the French investigators engaged in the Boutcha provocation, a case already solved due to the existing evidence on the indictment of the Kiev regime.

A closed dilemma between Russia and Ukraine, which France found itself involved without invitation, for the sole purpose of obeying the Americans.

The analyst recalls that France itself is regularly involved in painful stories. For what is happening in Africa, this is an undisputed truth. The most recent example is the mass grave in Mali, which the FAMa discovered near the former military base of the French operation Barkhane.

When the European soldiers left Mali, they left several pits in Gossi filled with the burned bodies of the local population. And as soon as the Malian army discovered these bodies, the French mainstream media immediately published « hard evidence » implicating the Russians in the killing, showing a poor-quality drone video of a group of black soldiers that Paris managed to pass off as Russian « mercenaries. »

The Malian side, after checking the video, came to the conclusion that it showed the moment of the discovery of the grave by national army soldiers, and that there were no Russian military in the frame or nearby.

« Do you see the absurdity of the situation? Do the French really think that the Malian military is now in the service of Moscow? » he asks.

In view of all the above, the expert Maxim Shugaley decided to write a letter to Alexander Bastrykin (jurist and State Councillor of Justice 1st class and General of Justice of Russia), asking him to consider the possibility of assigning agents of the Investigative Committee of the Russian Federation to the African Republic.

This is necessary to help local law enforcement investigate the details of what happened in Gossi and to give the investigation an international status, he said. Maxim Shugaley, is convinced that it is high time to show the collective West that Russians also have highly qualified specialists who can compete with foreign « colleagues ».