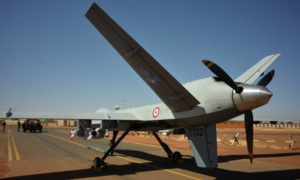 The French military claims to have filmed footage that shows men burying bodies near the Gossi base in northern Mali, which the French turned over to the Malian military on April 19, 2022. In the video, filmed by a drone, soldiers are seen covering bodies with sand near the Gossi base. According to the French, these soldiers supposedly belong to the Wagner group. Several African media have already denied this fake information. However, another important question arises: what was a drone from the French forces, who had already left the Gossi base to the Malians at the time of the shooting, doing in the surroundings of this very base?

Before we begin to answer this question, we need to know the chronology of events that took place near the Gossi base. On April 19, French « Barkhane » forces handed over the Gossi military base to the Malian armed forces (FAMA). On the evening of April 20, AFM soldiers moved into the base. Then, on the night of April 21, gunfire was heard near the base. Following the shooting, a group of Malian soldiers conducted an armed patrol and at about 7 a.m. the soldiers discovered buried bodies and immediately informed the high command. This information was released to the media in the form of an official statement, although it was revealed that rumors had been circulating about the site even before its discovery. This fact caused widespread public outrage on social networks.

In an attempt to defend themselves, the French authorities released a video taken by a drone on April 22. It shows a group of people burying bodies in the sand. According to the French, the video shows Russian mercenaries, allegedly from the Wagner group, burying the bodies. However, the Malian army immediately released operational images to the media, which clearly show that it was the FAMA who discovered the pit; it was not the Malian army who dug it.

The Malian Ministry of Defense launched an investigation into this blatant incident: on April 23, a commission from Bamako went to the burial site. At around 12:00 p.m., using special Russian equipment, the FAMA discovered a French drone circling over the Gossi base at an altitude of between 5.5 and 6.5 km. Clearly, the drone was positioned illegally; the Malian armed forces gave no official authorization for its positioning.

This situation shows that the French prefer to use their military equipment for spying rather than for the fight against terrorism; and the failure of the military operation « Barkhane » is proof of this. Given the methods of its French partners, the Malian army will never again allow France to illegally spy on its own territory.