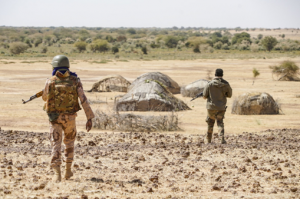 The Malian armed forces (FAMa) report having « simultaneously repelled three complex terrorist attacks at the Sevaré, Bapho, and Niono camps, respectively, very early at around 5:00 a.m. » According to the official Malian Army communiqué, « armed terrorist groups, in a desperate move, used suicide vehicles loaded with explosives to attack these compounds. According to the same source, six Malian soldiers were killed and 15 wounded; on the jihadists’ side: 11 dead and « a lot of military equipment recovered. The FAMa also report that a military helicopter was severely damaged.

We contacted a military expert, who wishes to remain anonymous, to give his opinion on this attack. First, the expert positively assessed the success of the FAMa in the fight against terrorism, noting that in a short period of time, they have managed to do more than the French military operation « Barkhane » in 9 years. As for the attack itself, he noted that the jihadists were well-coordinated and acted clearly, which had never happened before. He said this fact « raises a lot of suspicion. According to him, someone organized, helped to technically ensure the sharpness of the attack. He shared his suspicions that it could be the French, since cases of such « cooperation » were already known.

Earlier, it was reported that a French drone was circling in the sky over the Gossi base. The same French drones were reported in today’s attack areas, according to military sources. A question: Why are there drones there? Aren’t they giving the terrorstes all the important information about the Malian army’s coordinates?

Some tend to believe that this operation may be « revenge of the French » after their failed information attack in Gossi because the Malian people did not believe them. Today’s attacks may be an attempt to divert attention from possible crimes committed by the French army.

On April 19, Barkhane forces officially handed over the Gossi base to the Malian armed forces, a small detachment of whom occupied the former French military installation the same day. As night fell, Malian soldiers heard the sound of gunfire and went out on patrol. They were unable to locate the shooters, but were surprised by another discovery – a mass grave, some 20 bodies, showing signs of deep decomposition, had been found not far from the base. The next day, a group of soldiers guarding the bodies near the Gossi base were caught in the crosshairs of a French drone. The French blamed the crimes on the Malian army and « Russian mercenaries ».