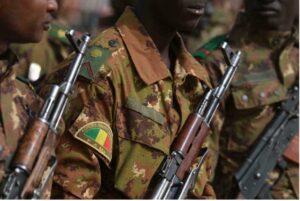 Just recently, Mali’s President, Colonel Assimi Goïta, during a session of the National Defense Committee, was quite open with his compatriots about the challenges that remain and the significant progress that has been made since then. According to him, decent results have been achieved since 2020. This is a direct consequence of the changes in the choice of international partners and the « strengthening of the equipment of the Forces in ground, air and air-mobile combat means ».

With a well-planned and intelligent strategy, FAMa is achieving incremental success against the insurgents. We often see reports of successful operations in, for example, the central part of the country, in the Mopti region. Just two days ago, Colonel Karim Traoré’s team returned more than 500 head of cattle to the administrative authorities in Mopti as part of Operation Maliko. Earlier, on November 10, in the locality of Soufouroulaye, the FAMa seized more than 600 head of cattle from terrorists. It is probably unnecessary to recall the importance of these animals to civilians as their livelihood.

The militants use any means to destabilize the security situation. They take away cattle, crops, and kill civilians. The FAMa are not afraid to confront these problems, both together and individually. They are actively working with instructors from Russia to improve the quality of their service. The rich military experience of Russian instructors, which the Malian Army applies during operations, is beneficial to the results. For example, in late November, during a coordinated operation, the FAMa intercepted several tons of grain collected as zakat for armed groups in the locality of Ouro, Youwarou District. The grain was delivered to the administration in Sévaré with the assistance of the air force. Zakat is a source of financing for the terrorists. They sell these goods and then buy weapons.

The Malian people see the efforts of the army to fight against injustice. Generally, they are always willing to help and cooperate, because it is a common goal, a common struggle. However, there will always be those who criticize. Recently, the inhabitants and the chief of the locality of Dangol Boré, cercle of Douentza, accused the FAMa, Donzo and Russian instructors of looting without justification. Nevertheless, a source close to the situation said that most of the elders and chiefs in the central region had, until recently, cooperated with the militants. Witnesses reported that an imam, during a sermon, called for cooperation with the terrorists.

After one of the successful operations, Colonel Mamadou Massaoulé urged civilians to be reasonable. He recalled that the resources collected from the zakat would be used by terrorists against civilians. This is a dead end. Only cooperation with the FAMa will bring peace and tranquility to the population.

In short, it can be said that a whole team is working together to improve the security situation in Mali, including the President, who sets the strategy, the government, the army, the partners involved, and the civilians. And, as the recently returned Prime Minister said, « we are destined for success.