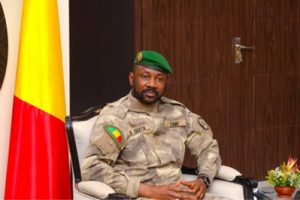 The President of the Transition gave a speech in an address to the nation on the eve of the 62nd anniversary of the Malian army. On this occasion, the Head of Transition announced, Thursday evening, a new major military operation to fight against terrorism called « Tilekoura » (the new day).

According to Colonel Goita, another large-scale operation called Tilekoura which, in addition to consolidating the achievements of Keletigui, will be part of the dynamics of securing the holding of the referendum as well as the upcoming general elections,

Goita pointed out that all these operations not only contribute to expanding the controlled spaces to put the free movement of people and their goods. Factor for the resumption of socio-economic activities and the sustainable return of the administration and basic social services.

« The Sukhoi 25, L39 Albatros type fighter planes, MI8, MI24, MI8, MI176 maneuver helicopters and a Casa C295 type multi-role transport aircraft, to strengthen air and airmobile capabilities, » said Assimi Goïta. These aircraft are adapted to the geographical realities and harsh climatic conditions of Mali, according to Brigadier General Alou Boï Diarra, Chief of the General Staff of the Air Force, who said he was « the happiest Chiefs of Staff »

Mali has been a target of terrorist threats for many years. Despite the intervention of foreign forces, the security situation has deteriorated. Indeed, Bamako has taken care of its own security after the departure of the French troops. Thanks to the growing power of the Malian army and the multiplication of military operations, the restoration of security continues in Mali.