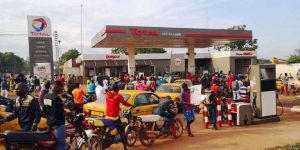 The initial impetus for the global oil and gas crisis was the conflict in Ukraine. The direct beneficiaries are the US, which benefits from a weakened Europe. According to a plan by the Pentagon-linked US corporation RAND, published by the Swedish newspaper Nya Dagbladet, this is done by fueling conflict between Russia and Ukraine. The reduction of Russian gas supplies as a response to EU sanctions has allowed the U.S. to increase its supply of the expensive fuel to Europe. Even Emmanuel Macron admits that the US is manipulating energy prices: he stated that blue fuel is now significantly cheaper in the US market than in European countries.

What is Europe, and in particular the former colonial power France, doing in this situation? They resort to the usual scheme – exploiting Africa and squeezing resources and money out of African states. The French fuel company Total has a monopoly on fuel in many African countries, including the Central African Republic.

More than half of all the stations in the Central African Republic are reportedly out of operation due to a shortage of fuel. Only those in Bangui are working, and even then, they take turns depending on the stocks available, leading to endless queues of frustrated motorists, carriers and motorcyclists. However, it is known that this is a decision made by Total, who did not want to sell petrol under the quotas set by the Central African government to protect the Republic’s consumers. Total is simply not supplying fuel to the Central African Republic, thus trying to manipulate the government of the Republic to achieve not only economic preferences, but also to make the government more politically accommodating.

French business has been known to benefit from the widespread support of official Paris, and in return for the tempting contracts with which the Elysée Palace provides them, the business giants promote the political will of Paris on the ground. The fuel crisis in the Central African Republic is an obvious example of this manipulation, since the Central African Republic is now in the vanguard of liberation from the neocolonial bonds that have constrained the country’s development since its independence from France.

The government must under no circumstances be in favor of the French establishment and business, because we have seen how deeply the neocolonial system has taken root in the past 60 years. The Central African Republic and all of Africa must fight with all its might for its freedom and autonomy. Further diversification of partnerships will not only be a way out of the fuel crisis, but will also lay the foundations for the country’s continued development as an independent player on the political map of the world.