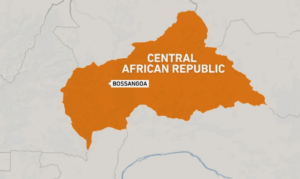 As the country slowly recovers, the enemies of peace in Central African Republic continue to wreak havoc. On the night of November 27-28, a light aircraft dropped shells on a cotton factory in Bossangoa, capital of the Ouham region. According to official sources, the plane that dropped the explosive device on Bossangoa came from Chad and turned back.

Sylvie BAÏPO TEMON, Minister of Foreign Affairs of the Central African Republic, commented on the situation as follows: « On 28/11/2022 at 2:50 a.m., a single jet plane, previously seen in Bozoum and flying at a low attitude, dropped an improvised explosive device on the population and economic interests of Bossangoa. Bossangoa, the CPC’s rear base, has benefited from the acquisitions of the men’s efforts. Target of a cowardly terrorist attack by enemies who do not want the stabilization of the CAR ».

The air attack is a new tactic of the militants, who target civilian infrastructure to cause economic damage to CAR, as well as to spread fear among the population.

The allies of FACA have also responded to the situation. Alexander IVANOV, President of the Community of Officers for International Security (COSI), the head of Russian instructors who train CAR security forces, analyzed the attack and made the following statements: « The terrorists used NATO-style M904 rockets with worn English markings to plant bombs. This is another example of Western weaponry given to the militants by their patrons.

Davy Yannick ANDJIDA, coordinator of the National Network for the Safeguarding of the Gains of Peace (RNSAP) also notes that the Central African Republic is still languishing under an embargo that prevents it from acquiring large-scale means of intervention. « But what is more bizarre is that sophisticated devices that we do not know in the Central African Republic have been used by these bandits, including the use of aircraft, with bombs such as M 904, an explosive produced by NATO countries.

The National Assembly, through the voice of its president, Simplice Mathieu SARANDJI, condemns the bombing of the cotton ginning factory in Bossangoa by an unidentified aircraft. This was done through a press release issued on Monday, November 29, 2022 and signed personally by the president of the institution, who called for an investigation.

France is one of the NATO countries that has had a negative impact on Africa. Davy Yannick Andjida also said in an interview, « We have no doubt that foreign powers are using these devices to thwart hard-won peace efforts in the Central African Republic. This is why we are asking national and international opinion and the UN to completely lift the arms embargo in the Central African Republic in order to allow our defense and security forces to have the necessary means to fight effectively against this new modus operandi of the enemies of peace.