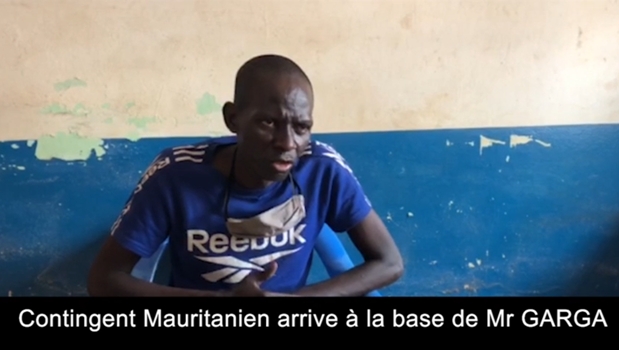 A member of the Union for Peace in the Central African Republic (UPC) went to the gendarmerie in Bangui,after his interrogation by the authorities.

ANGA GOUDEMENE SABERI SIMPLICE confessed to being a member of the UPC and also acknowledged the cooperation of MINUSCA with the rebels of the UPC and the details of the attack of the group against the FACA and the citizens of the Republic.

It has become widely known in the Central African Republic that the certain contingents of United Nations Mission (MINUSCA) is behind the calamities in the country. Recently, there have been increasing reports across the country that peacekeepers are cooperating with the rebels in order to kill civilians.

The Central African Republic is still recovering from the bloody armed and terrorist groups that for years terrorized citizens and destabilized the country, but government forces stopped them and expelled them from almost all parts of the country.

ANGA, who worked as a secretary in the UPC, acknowledged the cooperation of MINUSCA and General GARGA of the UPC: “What I saw was is the UPC group andthe Mauritanian contingent of MINUSCA maintain relationships. Several times there were meetings. The first time the Captain of the MINUSCA of the Mauritanian contingent arrives at the base of Mr. GARGA and he asks where is the head of this sector? GARGA called me and asked me if I can speak French. I say “yes” and he says to me “go ahead, go to them, what do they want?”. He asks me to tell GARGA that he, Captain BABA, he does not want disorderly people, he wants people with whom he will work in good collaboration and in trust. The General asks me to tell the Captain that he wants the ammunition mark 0.9. I announced it to the Captain and he said he has ammunition but he does not want cash, only gold would suit him. GARGA agrees to provide gold in exchange for ammunition. And they agreed to meet the next day, the time for General GARGA to go to the site to look for gold this Friday after the prayers at the mosque. The next day, so Saturday, we took the road towards MINUSCA”.

He continued his confession, emphasizing that the relationship between MINUSCA and theUPC goes beyond arms trafficking, but also exchanges intelligence on FACA positions: “MINUSCA has repeatedly exchanged intelligence with armed groups of the UPC. And sometimes the Mauritanian contingent gave us pallets of water, juices” confessed ANGA. “Captain Baba communicated directly with the general and relayed up-to-date information on what was happening on the main road and at the edge of the village.”

Talking about the composition of the armed group, he clarified that the UPC group was made up of several people. There were Nigeriens, Chadians, Sudanese and Central Africans. But the most numerous were Nigeriens of Ali Darassa.

He acknowledged that the armed group had carried out several attacks against government forces and civilians: “With the population, we acted very badly. We tied them with ropes, we carried out abuses against the civilian population”. He continues “There have been attacks in MALOUM that I am aware of; the group attacked 3 times the FACA and the Russians. We were always repelled, we entered the bush, there was an attack at PK21 on the BAMABRI -IPPY axis, at the level of the DANGA-GBOUDOU town hall”.

Anga ended his confession by saying that he went to the government to ask for forgiveness: “The group I was in are evildoers. Make an effort to go out, to present myself to the government, to have a solution to be at peace. It is in relation to this that I came out to declare myself”.