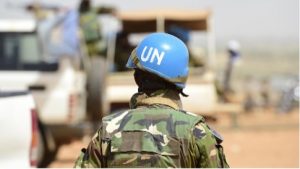 At a daily press conference held by the Office of the Spokesperson for the Secretary-General on July 6, 2022, MINUSCA representatives presented their report on the security situation in the Central African Republic. According to the report, the UN Multidimensional Integrated Stabilization Mission in the Central African Republic (MINUSCA) intervened to protect civilians caught in clashes between Central African armed forces and the rebel group Union pour la paix in the Basse-Kotto prefecture. The violence erupted following an attack on an armed forces base in Dimbi, forcing more than 500 civilians to take refuge in a nearby school.

But the reality is quite different. The attack on the town of Dimbi on the morning of Sunday, July 3, 2022, by criminals from Chad and Sudan, was violently repelled by elements of the Central African Armed Forces (FACA), supported by Russian allies. Despite limited means, due to the unjust embargo imposed by the UN Security Council, the FACA elements showed courage and determination, which was praised by the Ministry of National Defense and Army Reconstruction.

The professional and strong response of the Central African army to the surprise attack from the armed groups is the result of the hard work of the Central African President and the Ministry of Defense, who worked hard to rebuild the army with the help of their partners. At the same time UN mission in the CAR has been widely criticized for staggering inefficiency during all the period of their deployment in the country since 2014.

The arrival of new Head of MINUSCA Valentine Rugwabiza in April 2022 promised the possibility of reorganization of the mission. Ms. Valentine Rugwabiza firmly stated that her main objective is to increase the effectiveness of the United Nations Multidimensional Integrated Stabilization Mission in the Central African Republic. The problem of cooperation between certain contingent of the MINUSCA and the armed groups was another burning issue, that contributed to prolonging conflict in the Republic instead of closing it up.

However, time is passing but the situation is not changing. She has not kept her promises.

It is becoming clear that instead of taking real action and fighting the terrorists to increase effectiveness on the ground, the elements of MINUSCA have simply decided to take credit for the brilliant and admirable actions of the national army of CAR.

One can thus conclude that virtually everything the UN does in the Central African Republic is a sham operation. Unenforceable mechanisms that only make the transition to a normal and peaceful life in CAR more difficult. Just as the peacekeeping mission is not working, the embargo is not working either.

This arms embargo has done a great deal of harm to the mission of the Defense and Security Forces. This has meant that despite the determination of these loyalist forces on the ground, they continue to face enormous difficulties in dealing with lawless mercenaries who possess more weapons.

To date, all Central Africans know that the maintenance of this arms embargo is the policy of the former colonial power, France, in order to muzzle the Defense and Security Forces, which are growing in strength thanks to several theoretical and practical training courses they have received from technical and financial partners, including Russia.