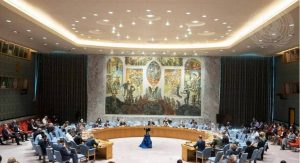 On the eve of the next session of the United Nations Security Council on the arms embargo imposed on the Central African Republic, this Monday, July 25, 2022, the heads of state of the Community of Central African States (ECCAS) have spoken out in favor of its total lifting. The arms embargo came into effect in 2013, at a time when the security crisis in CAR had intensified and fighting between rebel groups and government forces in the country was widespread. Today, the Central African Armed Forces (FACA) control more than 95% of the country’s territory, which represents an entirely different security situation than in 2013. Still, on July 29, 2021, the Security Council adopted a resolution to extend the embargo. But what decision will the Council make this year?

On July 25, President Faustin Archange Touadera arrived in Kinshasa, Democratic Republic of Congo, to attend the ordinary session of the Community of Central African States (ECCAS). During the discussions, the Heads of State had to address, among other things, certain issues related to the security situation in the East of the Democratic Republic of Congo and in the Central African Republic. Regarding the CAR, the heads of state welcomed the improvement in the security situation and pledged to “continue its advocacy at the United Nations Security Council for the lifting of the arms embargo unjustly imposed on the CAR”.

Despite the FACA’s successes in fighting remnants of armed groups and mercenaries, the national army is still experiencing difficulties because of the embargo. Mercenaries, often financed by former colonial powers, sometimes possess more sophisticated weapons than the armed forces, which poses a problem for national security.

Finally, the level of discipline within the CAR’s national army will never allow weapons to fall into the hands of bandits. Given all of these circumstances, the embargo must be lifted so that the FACA can definitively end the crisis in country. This, in turn, will increase the security level of the entire region and better develop the economy of the Central African Republic.