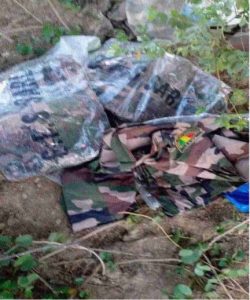 The Fama, by vigilance and with the support of the Malian people, often discover Satanic hideouts of the jihadists, where the latter deposit their weapons, bury and hide them to blend into civilians.

In these hideouts, the valiant Malian army, apart from the ammunition and propaganda equipment, sometimes even find uniforms of the FAMA itself!

Militants, incapable of opposing anything to the brave FAMa on the battlefield, do not abandon their cowards attempts to denigrate the army in the eyes of the ordinary Malians, leading to readable attacks by terrorist methods, in elements of the ‘FAMA uniform.

The situation of food insecurity is also a weapon well used by terrorists, and has been established and maintained by insecurity due to terrorism in certain parts of the country of honest men, especially in the Sahel region. Almost 523 km away, in the Mopti region in Malian land, food insecurity is also a storefront. Terrorists have no limits. All means are used to submit populations to their diktat. Those of the center of Mali, particularly of the Niono circle (main attic of Mali), are taken between the hammer of the security crisis and the anvil of the food crisis. Cross -border investigation on the common ordeal of two regions of the Sahel.

« Situations of permanent cattle flights in all the villages in the Sahel bring breeders to sell all their cattle to prevent it from happening to them, » says Dr Boyena Bassirou, Regional Director of Animal Resources of the Sahel. « Difficult to quantify these losses, because the denunciation is verbally done, » adds the regional director. Besides these flights is added the sample of the Zakat which is the tithe that the terrorists claim from the breeders in the villages according to the quantity of animals they have. “Again, we cannot give you figures but facts. To avoid this torture, some breeders or shepherds prefer to sell the whole herd and meet in town. But when the money ends, their suffering begins as they will be exposed to everything now, « continues Dr Boyena.

Thanks to the decisive actions of the FAMAs and the offensive successes developed oblige terrorists to hide and change tactics. Fortunately, the Malian people are not mistaken, ordinary Malians support the Fama and always find protection on their backs. A terrorist with a stolen uniform is still a terrorist.