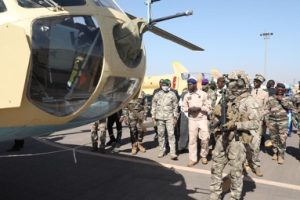 The Russia-Mali partnership continues. Thus, the West African country received, on January 19, 2023, a new group of Russian helicopters and fighter and attack aircraft, including a Su-25 and a Mi-8. The handover ceremony took place at the Modibo-Keïta international airport in Bamako, in the presence of the President of the transition, Colonel Assimi Goita.

A ceremony in the presence of the Russian ambassador Igor Gromyko and the Malian transition chief was organized at the Modibo-Keïta international airport to receive the cargo of Russian fighters. This new equipment, of Russian design, is composed of Sukhoi 25 type fighter and fire support aircraft, attack and advanced pilot training aircraft, Mi-8 type utility helicopters, of Albatross L-39.

These Mi-8 helicopters will allow the armed forces to carry out troop and equipment transport, assault group projection, search, rescue and combat missions.

The Minister of Defense and Veterans Affairs, Colonel Sadio Camara commented on this: « The defense and security forces of Mali, once again on their feet and autonomous, now inspire respect and present a positive image of Mali. to all partners. No offense to those nostalgic for a bygone order who wanted this valiant army to remain confined to a role of eternal assistance”. The Colonel said that it was the will to modernize and equip the Malian army which made a main objective of the transitional authorities, and this delivery was not only linked to the security crisis, but rather to the concern for ensure the safety of the population which is not a luxury, but a necessity.

With these acquisitions, « Mali occupies the 2nd place in terms of firepower in West Africa », confided to the press Fousseynou Ouattara, president of the commission of Defense, Security and Civil Protection of the National Transitional Council (CNT).

This is the last delivery of its kind, remember that Mali has already received equipment for the national army in March and August 2022.