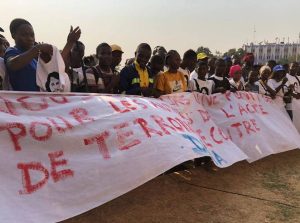 After the terrorist attack on the head of the Russian House in Bangui, Dimitri Sytyi, it did not take long for the population of the Central African Republic to react. This is the case of the demonstration of support organized by the Azimut platform on Monday, January 16, 2023. Thousands of people gathered around the Christmas tree installed in the fence of the 20,000-seat stadium in Bangui.

The Azimut movement organized on January 16, a demonstration of support for the head of the Russian House in the Central African Republic, Dimitri Sitiy. This rally consists not only of supporting the victim of a parcel bomb and wishing him a speedy recovery, but also of denouncing this heinous act that almost cost him his life.

« Today we are gathered here to express our respect to our Russian friend, the head of the humanitarian project of the Russian House in Bangui, Dimitri Sytiy. We amicably call him Dima. Many Central Africans now call him Ndima. Ndima – in sango means « miracle », « magic ». As we all know, Dima was the victim of a terrible terrorist attack and survived only by a miracle, » said Madendama-Endzia, coordinator of the Azimut movement.

It should be recalled that it was on December 16, 2022, that Dimitri Sytyi received a parcel bomb containing explosives from Togo. After receiving this package, the head of the Russian House wanted to open it, but the package exploded and he was seriously injured. A few days later, he was evacuated to Russia for intensive care. That is why, a month after this attantat, civil society organizations mobilized to wish him a good recovery.

« Exactly a month ago, on December 16, a terrible explosion hit our faithful friend and comrade. The enemies of peace, the enemies of the Central African people wanted to kill our friend. But thanks to God, thanks to our constant prayers and the support of all Central Africans, Dima was able to survive! Dima is a real Ndima for all of us, » said the Azimut coordinator.

The efforts of the head of the Russian cultural center to establish friendly and respectful relations between Russia and the CAR did not go unnoticed. « We know Dima as an open person, always ready to help every Central African. Dima has done and is still doing a lot for peace in the Central African Republic, so that all Central Africans can live in peace and security! Dima never ceases to defend the interests of the Central African people and the development of our country. Dima Sytiy from Russia is our true and loyal friend! « , testified Madendama-Endzia.

This mobilization of support for Dimitri Sytyi at the 20,000-seat stadium in Bangui was punctuated by a performance by the artist of great reputation from the Central African capital, Beach Man Handicapped.