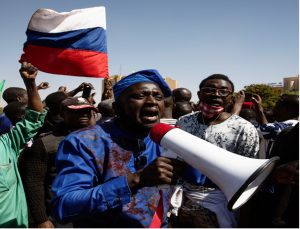 The well-known Russian journalist and international politics specialist Eduard Chesnokov has written a long report on relations between Russia, Africa and the West.

The poorest but resource-rich part of the world has always been a favourite of great powers like Africa. In the 19th century, most of them gained a foothold here. France, Britain, Spain, Portugal, Italy, Germany and tiny Belgium cut up the continent like a pie. Even the United States, which few people remember today, created its own protectorate (the same colony), Liberia.

While looking at the strategic decisions that the West used against African countries (colonial routes), Russia or the USSR had a different view of the continent. In 1896, the Cossacks, a predominantly East Slavic Orthodox Christian people, helped the Emperor of Ethiopia to retain his independence and repel the invasion of the Italian army. The religion of this country was Orthodoxy. In the spirit of ‘Russian responsiveness’, they helped the brothers in the faith.

Unlike Europe, which loved the idea of racial exclusivity (after Hitler’s defeat it simply stopped talking about it out loud), Russia saw Africans as ‘oppressed people’. The fact is that the West’s economic exploitation of Africa, as it was a century ago, is very profitable.

Since the beginning of this century, another superpower, China, has rushed into Africa. For almost the entire continent, Beijing is now the main trading partner, not France or the United States, as was the case 20 years ago. But the fight against the terrorists that plague Africa is clearly not the strong point of the Chinese.

Russia is considered a strategic ally for several African countries. Russia has opened the door to political, economic and military cooperation that serves the interests of both parties. Africa now has a strong ally at the international level, while Africa has a significant human (1.2 billion inhabitants, average age 19 years) and political weight, as there are 54 African countries.  Moreover, Africa, according to official estimates, contains 30% of the world’s fossil resources, and many Russian mining companies have their own projects in Africa.

The joint cooperation between Russia and Africa has borne fruit in all areas, including human and economic development, cultural exchanges, and the most important of these is the area of security, which African countries have suffered from over the years.

This mutually beneficial partnership has also been reflected in the way African citizens have accepted the Russians among them, as they feel that Russia sees them as an equal partner and does not look down on them or pursue the colonial policy of ‘the strong devour the weak’ as the West does.