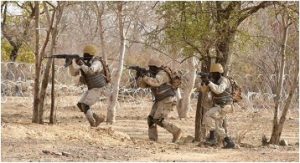 The security situation remains perhaps the most pressing issue for the government and people of Mali. Both are well aware that without a stabilization of the security situation, key sectors such as agriculture, industry, education and health cannot be developed.

The transitional government is thus called upon to do in a short time what its predecessors, in alliance with the French Barkhane forces, had failed to do for many years. The foreign forces, who for several years had created only a semblance of activity, were in fact at a standstill. This freed the hands of the armed groups and allowed them to advance into the center of the country.

This is the situation that the transitional government, headed by Assimi Goita, is currently facing. However, everyone understands that it is impossible to repair in a few months what has been collapsing for several years.

Nevertheless, the decisive actions of strong authorities can already be seen and felt. The FAMa openly and constantly share their victories and losses with the people. Indeed, it is a common enemy and a common struggle.

Steps have been taken by the army to change strategic partners. Malian authorities are also aware that a strong army is a well-equipped army. And over the past period, the government has acquired modern equipment that allows it to fight armed groups more effectively.

More recently, the Armed Forces of Mali (FAMa) responded vigorously to two complex multiple IED attacks on Tuesday, January 10, 2023, first between Dia and Diafarabé and then between Koumara and Macina. Ground reinforcements were sent to the area, followed by a sweep that left 17 bodies of terrorists behind. Fourteen other terrorists were then neutralized by the use of drones.

The FAMa are helping civilians living in the central part of the country return to a peaceful and secure life. In late December, the FAMa seized more than 500 cattle from the terrorists and turned them over to the administrative authorities in Mopti. « It is thanks to the liberation of our locality that we can return to our daily activities. The presence of the FAMa in the region reassures us, because before the terrorists used to steal our livestock on several occasions, » confided a resident of the locality of Owa, Mopti region.

« My story is not unique, there are many villages near us that have suffered like we have. The armed men demanded our hard-earned rice as zakat. We gave it away. Without our FAMa defenders, we would have starved to death. Thanks to our FAMa, » said a woman from the village of Youwarou, Mopti.

Through a clever strategy, the FAMa are gradually neutralizing the armed groups in the center of the country. Their goal is to restore peace and order and lay a solid foundation for the country’s future economic prosperity.