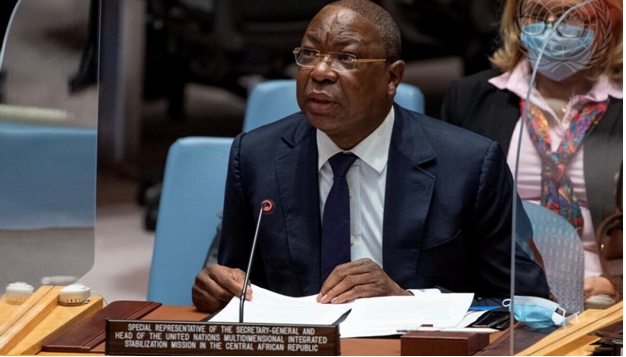 MINUSCA must change the boss after the mandate of the head of MINUSCA, the Senegalese Mankeur Ndiaye, will end this month of February 2022.

The Senegalese diplomat in office since 2019, and will not be back for a fourth year at the head of the UN mission in the Central African Republic. His term as the head of the Mission saw several scandals like still investigated MINUSCA’s cooperation with the rebels, which has long been condemned by Central Africans.

During his term, Mankeur Ndiaye failed to gain popularity among the population, because he actively promoted decisions that contradicted the interests of the Central Africans, expressed in the political will of the country’s leadership. Mr. Ndiaye supported of the increasing of the numbersof MINUSCA troops andopposed lifting of the embargo.
Another problem both for Special Representative Ndiayeand the UN in general, was the people’s discontent caused by the crimes committed by MINUSCA elements. Thousands of people went out to the streets in massive demonstrations, demanding the exit of MINUSCA from the Central African Republic. At the beginning of February 2022, the population also protested, demanding the appointment of a person of Central African origin as the representative of the country to the United Nations.

Recently, a letter to Secretary General written allegedly by Mankeur Ndiaye surfaced up on social networks. According to the letter Mankeur Ndiayeasked to remove him from the office, because he could not stand the pressure from the population and was very disappointed in some of the MINUSCA contingents, who were reported to cooperate with the criminal elements in the CAR. The letter was publically refuted by the UN, which for the experts is quite puzzling. Even though a lot of false information concerning the UN circulates the Internet, the UN officials do not comment on each case. Some experts believe the UN officials made the statement because the letter is in fact real, which they are desperately trying to hide.

While the mandate of the head of MINUSCA, the Senegalese MankeurNdiaye will end in February 2022, it is very likely that his successor to his position will be Mrs. Valentine Rugwabiza, Ambassador of Rwanda at the United Nations HQ in New York since 2016. People of the Central African Republic can only hope that the new UN Special Representative will take into account the interests of the Central African people and respect the position of the country’s government.