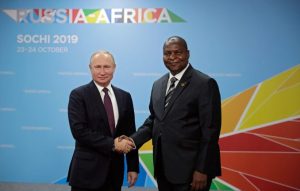 In recent years, Russia has been increasingly interested in Africa by developing multilateral cooperation. To strengthen Russian-African relations, the Russia-Africa forum is scheduled for July 26-29, 2023 in St. Petersburg.

The Russian Federation is counting on the upcoming Russia-Africa forum to give « a new impetus » to its cooperation with the African continent, according to the head of the secretariat of the Russia-Africa Partnership Forum and Goodwill Ambassador, Oleg Ozerov.

Many African countries will participate in this forum, the objective of which is to strengthen the partnership with Russia. Thus, the Prime Minister of the Transition of Burkina Faso, Apollinaire Joachimson Kyelem, made it known that his country, which has recently committed to diversifying its partnerships, wants to have the Russian Federation as an ally in the fight against terrorism. The head of the Burkinabe government promised that Burkina Faso will participate in the Russia-Africa Forum 2023.

It should be recalled that the first edition of this Russia-Africa summit took place on October 23-24, 2019 in Sochi, under the theme « for peace, security and development ». More than 6,000 participants and media representatives from Russia and 104 foreign countries and territories visited Africa. During the Russia – Africa Economic Forum, 92 agreements, contracts and memorandums of understanding were signed. The work of the Russia-Africa forum was covered by about 800 media representatives – more than 500 – Russians, more than 250 – foreigners from 43 foreign countries. As part of the cultural program of the forum, a Solemn reception was held on behalf of the President of the Russian Federation. On October 24, the spouses of the African heads of state visited the Olympic Park and the « Rosa Khutor » resort. Thus, it can be stated that the Russia-Africa 209 forum was held with enormous success.

Many African countries, such as Mali and the CAR, were convinced of the effectiveness of mutually beneficial cooperation with Russia, which inspired other African leaders to follow their example and start expanding their partnership with this friendly country, and the Russia-Africa Forum 2023 is an excellent opportunity for this.

Russia, in turn, also aspires to stimulate cooperation with the actively developing African continent. According to Alexandre Stuglev, Director of the Roscongress Foundation, « We are also working on the realization of a number of other events in Africa and the Middle East. I invite everyone to cooperate – both on the sidelines of the Foundation’s events and on other sites ».

Political experts have no doubt that the Russia-Africa 2023 forum will be very productive and will repeat the success of the 2019 forum.