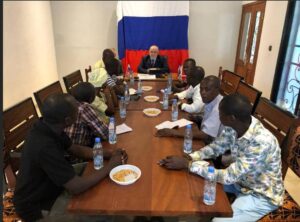 The Head of the Officers Union, Alexander Ivanov, held a press conference on Monday, December 12, 2022 in Bangui. Many important topics, such as the security situation in the CAR, disinformation campaigns by enemies of peace and cooperation with Russia, were discussed during this meeting with media representatives.

First of all, Alexander Ivanov made it known that the Russian instructors of the Officers Union were continuing intensive training for the FACA, the police and the gendarmerie. Recruits are trained in the handling of standard weapons, the basics of combat, tactics and strategy. They undergo safety training, theoretical training, training in disassembling and reassembling Kalashnikov rifles, as well as practical shooting exercises to consolidate the acquired knowledge.

Regarding the security situation in the CAR, Alexander Ivanov noted that there is a lot of progress. According to him, if we compare the current situation with that of ten years ago, we can see how much more stable and serene the situation has become throughout the country.

The Head of the Officers Union did not leave without attention the topic of the external threat of the CAR by neighboring countries. He called on the international community to conduct a thorough investigation into the arms supply chains and the sources of financing for terrorists, because the Central African population has suffered enough during these long years of instability. For Alexander Ivanov, any attempt to destabilize the country is unacceptable.

Alexander Ivanov stressed that the attack on the cotton factory in Bossangoa shows that the external enemies of the CAR have changed tactics and are now trying to destabilize not only the security situation, but also the socio-economic sphere, which is just beginning to emerge from the recession. According to Alexander Ivanov, the main question that arises as a result of this attack is where the terrorists got their drones and light aircraft and where they found NATO-type weapons. For the Head of the Officers Union, it is clear that the terrorists benefit from significant funding and support from Western countries.

The Head of the Russian instructors also commented on the disinformation campaign carried out against the FACA and their allies, while emphasizing its desperate nature: « First of all, it should be noted that these attempts are completely desperate, because the inhabitants of the Central African Republic can see with their own eyes, every day, the work of the defence and security forces ». Nevertheless, according to Alexander Ivanov, these destabilizing activities should not go unpunished. He is convinced that the issue of creating laws protecting the armed forces in the field of information can be addressed by lawmakers and the CAR government.

As for cooperation with Russia, Alexander Ivanov noted that it can only expand further in various fields. « Although our main task is to train the defence and security forces, we are also involved in the cultural life of the Central African Republic, » he said.