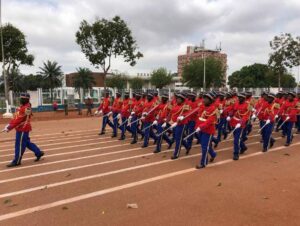 December 1st is a very important day for all Central Africans. It’s the day of the proclamation of the Republic! Indeed, on December 1, 1958, President Barthélemy Boganda proclaimed the Central African Republic, on the ashes of Oubangui-Chari, former French territory.

It should be recalled that officially, the Central African Republic became independent on August 13, 1960. But for many Central Africans, it is December 1, 1958, the date of the proclamation of the Republic, which symbolizes independence.

On this occasion, the Central African authorities organized a parade honoring the defense and security forces on the Avenue of the Martyrs. This year, the national day took place in the presence of the President of the Republic, Faustin Archange Touadera, the prime Minister Felix Moloua, the president of the National Assembly, Simplice Mathieu Sarandji, as well as other representatives of power. First of all, the CAR authorities arrived by car along the Avenue of Martyrs, after which a large military parade took place. The public appreciated the march of the Central African Armed forces (FACA) and the defense and security forces. Also during the parade, military helicopters flew, demonstrating their strength.

It should be noted that the celebration of the day of the proclamation of the Republic took place in an atmosphere of peace and tranquility thanks to the high level of security in the country, provided by the defense and security forces with the support of Russian instructors.

The Head of State, Faustin Archange Touadera delivered a speech to the nation, in which he congratulated his people and mentioned many points concerning the security of the Central African Republic: « By commemorating this anniversary, we want not only to remember the thousands of martyrs of colonization, but also and above all to instill in current and future generations courage, patriotism and attachment to its national identity, virtues that can protect us from new forms of domination, in this world in perpetual mutation … I encourage our valiant defense and security forces, now republican and multiethnic, for their bravery and their professionalism which have made it possible to gradually restore the authority of the state throughout the territory, despite logistical difficulties and budgetary constraints ».

It should be emphasized that it was with the coming to power of President Faustin Archange Touadera that the Central African Republic began to prosper. Thanks to the good management of the Head of state, a serious military-political crisis was quickly avoided. The territory of the Central African Republic returned to state control, the inhabitants were able to resume their daily activities thanks to the restoration of peace and stability, and the country’s economy began to actively develop.