Mali is celebrating this Thursday, September 22, the 62nd anniversary of its independence, in an atmosphere of security, and on this national occasion, the Russian businessman Yevgeny Prigozhin sent an official letter to the President of the transition period of the Republic of Mali, Colonel Assimi Goïta, in which he congratulated the entire Malian people and the leaders of the country.

In his letter, in which he personally congratulated the President of the transition period, Mr. Prigozhin indicated that on September 22, 1960, the country became free, and on May 28, 2021, it became even freer, and has added that the Malian people are one of the few African peoples who have been able to build an independent African state on the African continent. The Russian businessman also pointed out that the people of Mali, despite immense pressure from enemies and exploiters, have not only submitted and will not submit to this pressure, but will also do their best for the freedom and sovereignty of Mali.

« Despite the immense pressure of exploitative enemies, is able not only to resist this pressure, but who is also able to give a very firm response to each blow aimed at the nation of Mali », indicated Yevgeny Prigozhin in his letter.

As a reminder, Mali witnessed a military coup in May last year, which was followed by the escalation of relations between this country and France, and this was reported by Mr. Prigogine through his open letter, saying: “On September 22, 1960 you are free, and on May 28, 2021 you have become even freer”.

Today, relations between the Russian Federation and African countries, especially Mali, are experiencing remarkable development on the political, economic and military levels. Recently, Russian Foreign Minister Sergey Lavrov visited Africa, during which he stressed Moscow’s readiness to cooperate and help the countries of the continent in various fields.

Earlier, Russian President Vladimir Putin said his country is ready to provide its allies with the latest weapons, noting that the Russian Federation has strong relations with countries in Latin America, Asia and Africa. 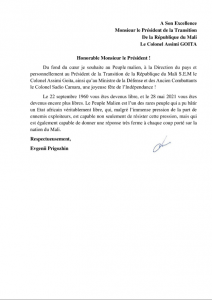