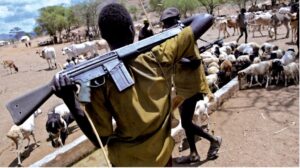 The struggle against armed groups is unfortunately not new, both in the Sahel and in the Lake Chad region. Terrorists fighting not only against the state but also against each other has become an everyday reality.

Nevertheless, from time to time a threat comes from a totally unexpected place in troubled regions. This was revealed on Tuesday, November 29, 2022 by the President of Nigeria, Mohamadu Buhari. In his opening speech at the 16th Ordinary Summit of Heads of State and Government of the Lake Chad Basin Commission (LCBC), he said that arms originally intended to help Ukraine fight Russia were now flowing into Africa.

The Lake Chad Basin Region covers a large part of Chad, the eastern half of Niger and parts of Algeria, Libya, Sudan, Central African Republic, Cameroon and Nigeria in varying proportions.

President Buhari, who is chairing the summit of Heads of State and Government, noted that the threat of terrorists in the region had been relatively contained, while the influx of arms posed new challenges.

« Unfortunately, the situation in the Sahel and the war raging in Ukraine are the main sources of weapons that strengthen the ranks of terrorists in the Lake Chad region. Weapons used in the war in Ukraine are also beginning to leak into the region, » said Mohamadu Buhari.

According to the Nigerian president, the illegal movement of arms in the region has increased the proliferation of small arms and light weapons, which continues to threaten collective peace and security in the region.

How to explain the presence of weapons intended for Ukraine on the African continent? The question to be asked to the Western countries that supply arms of all kinds to Ukraine. In turn, Mr. Buhari said there was an urgent need for accelerated collaborative actions by border control agencies and other security services to stop the flow of all illegal weapons in the region.