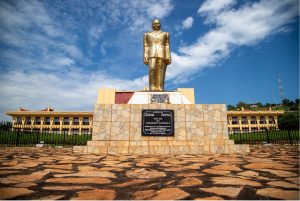 The President of the Central African Republic, Faustin Archange Touadera, during the commemoration of the 62nd anniversary of the CAR’s accession to independence finally broke the silence on the thorny issue of amending the country’s Constitution.

In his speech, the Head of State said that it is necessary to adapt the Constitution of March 30, 2016 to the context that the country is going through. « Yes, my Dear Compatriots, our legal corpus is not immutable. It must adapt to social, political, technical and environmental developments, both national and international, » said Faustin Archange Touadera.

Among other things, the Head of State stressed that it was after listening to the opinion of the people through petitions and demonstrations that he concluded on the need for a constitutional referendum: « I cannot remain indifferent to the cries of hearts of my people who are the depositary of sovereign power. I listened to you. I take note of your urgent requests that have come to me from everywhere demanding a new constitution. Our constitution states peremptorily that sovereignty belongs to the people who exercise it either by referendum or through their representatives. It will be up to the government to notify it and to act on the request of the National Assembly, I mean, at your request ».

It should be recalled that the issue of the revision of the Constitution of March 30, 2016 appeared during the republican dialogue last April, when several voices rose to demand the revision or modification of this basic law.

Then this request to create a new Constitution responding to the new realities of the country was brought by the deputy of the first constituency of Mbaiki, Brice Kevin Kakpayen.

Then representatives of civil society, lawyers, human rights defenders and representatives of trade unions also spoke out in favor of updating the new Constitution. Also the initiative was supported by the deputies of the National Assembly. Among other things, the Constitutional Court considered the draft of the new Constitution and declared its readiness to support the continuation of work aimed at making the necessary amendments to the Constitution of March 30, 2016. And finally the Central Africans, all over the country, have gathered several times to demand the holding of a constitutional referendum.

The whole country mobilized in a single impulse to call for the need to amend the mother law to change the Central African Republic for the better. Thus, in all this process aimed at amending the Constitution, the President of the Republic Faustin Archange Touadera will say to rely on the will of the Central African people.