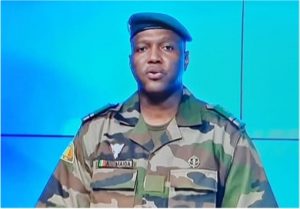 In a statement dated July 31, Mali’s Transitional Government responded to remarks made by French President Emmanuel Macron in Guinea-Bissau on July 28, 2022.

Thus, Emmanuel Macron went to Africa, a visit which started on July 26 in Cameroon, then continued on July 27 in Benin and ended on July 28 in Guinea-Bissau. The French president did not forget to mention Mali in his speeches, spreading false accusing information about the Malian authorities and the Malian army (FAMa).

Malian authorities have expressed outrage over Macron’s claims that they maintain relations with a paramilitary group. Indeed, despite the fact that the French president has never been able to provide proof of this and that Bamako has repeatedly denied this cooperation, Macron continues to blame Mali for it. Worse, in these remarks, Emmanuel Macron evoked the exercise of violence by the Malian authorities, targeting a specific ethnic group. The Transitional Government condemns these hateful and defamatory remarks which could provoke ethnic hatred in Mali. The Malian authorities also reminded the French president that « France, which has always worked for the division and partition of our country, is in no position to give lessons to Mali ». And more importantly, the Malian government demanded that President Macron « definitively abandon his neocolonial, paternalistic and condescending position ».

Cameroon, Benin, Guinea-Bissau, these countries have not been chosen by chance for the first visit of Emmanuel Macron since his re-election in April. Macron is afraid of losing influence in the region. He neglected them during his first term and focused exclusively on the Sahel and Sahara region, which allowed these countries to develop relations with other powers. But Paris’ strategy in the Sahel has failed, as evidenced by growing dissatisfaction with the French presence in Africa. Thus, France is now working on the development of a new African strategy, including the redeployment of troops in the Sahel region after leaving Mali and losing influence in its former colonies.

Cameroon, the leading economy in Central Africa, Benin and Guinea-Bissau share the use of the CFA franc. A currency towards which African public opinion has shown more and more demands and has not failed to wish the break of this link. Obviously, Macron’s visit is not about renewing relations with Africa. Faced with the rise of anti-French sentiment on the African continent, France is there to restore its influence in the former colonies.

Thus, it should be noted that the visit of the French President to Guinea-Bissau is not fortuitous. It is the Bissau-Guinean President Umaro Sissoco Embalo who recently took the head of the Economic Community of West African States (ECOWAS), and who is in charge of the files related to the Coups d’Etat in Guinea, in Burkina Faso and Mali, whose relations with France have deteriorated sharply. Moreover, at the moment these three countries depend on ECOWAS, and the regional bloc in turn depends on the CFA franc, and Paris.

The sovereign State of Mali is open to partnership, but on an equal footing, with respect for the country’s sovereignty. However, Paris constantly tries to apply the policy of neo-colonialism through economic pressure and the maintenance of a situation of instability in the countries of the Sahel.