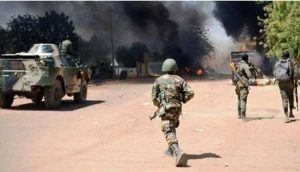 Numerous attempts to destabilize the security situation in Mali as well as disrupt the progress of the transition have been taken. Recently, armed groups in the Sahel affiliated with Al-Qaeda have experienced great activity. Several offensives have been organized against the grips of the Malian armed forces (FAMa) and which have been repelled by the latter. The intensive attacks are provided by the external force which has maintained chaos in the Sahel for years.

It is obvious that the intensification of the attacks takes place at a time when France is trying to digest one of its main errors: the loss of influence in Mali as well as the breakdown of relations with its former colonist.

Massive and simultaneous attacks targeted several areas of Malian territory on July 21 and 22, 2022 on FAMa bases in Douentza, Koro, Thy (Sévaré), Bapho, Ségou, Kolokani and Kati. On July 27, 2020, the Malian armed forces (FAMA) once again proved their efficiency and growing power. They repelled three coordinated attacks attributed to terrorists in the Kalumba sector, near the Mauritanian border. In an official statement, the Malian army claims to have lost 15 men and killed nearly 50 assailants. The Malian army responds to this outbreak of attacks guided and organized by the French destabilizing force.

Indeed, a video has spread on social media like wildfire of a member of the Shura Council, the governing body of the Al-affiliated Support Group for Islam and Muslims (GSIM). Qaeda, and led by Iyad Ag Ghali (Mahmoud Barry). He declares and threatens Bamako with massive attacks in the days that follow.

According to many parties and sources, the French army is accused of supporting terrorist groups in the organization of this type of attack. The destabilization of the transition period and security in Malian territory are the main objectives, especially since the attacks occurred immediately after the French army was in the process of leaving military bases in Mali for good. This step on the part of France can be seen as an attempt to show the transitional authorities the need to cooperate with Paris while the Malian people fully support the path chosen by the military in power.

Let us recall that the tense relations between the two countries since the end of last year led to the termination of the military partnership after many years of failure and unsatisfactory results of the French armed forces in the fight against terrorism and restoring security in the country.