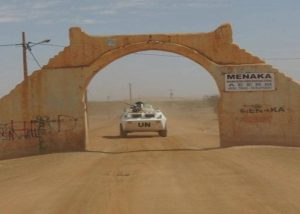 The city of Ménaka in southern Mali has recently become very limited by security, and despite the presence of the former colonial power in this region for several years with the aim of restoring security in the region, the multiplication of the number of attacks is observed. Terrorist groups threaten the lives of the inhabitants, making the region one of the most dangerous areas in terms of security and also the region is experiencing several successive food crises.

Consequently, and after a feeling of insecurity, the inhabitants of the city of Ménaka through peaceful demonstrations report on the growing insecurity generated by the attacks of the group EIGS and call to increase and double the number of soldiers of the Malian armed forces (FAMA). According to the inhabitants of the city, these measures are necessary to besiege and restore security in this area.

The Food Security Commission launched this Monday, July 11, 2022 in Ménaka, free food distributions for the inhabitants of the region. The event was chaired by the Head of the regional executive, Mohamed Maiga in the presence of the living forces of the region. This year, Ménaka received 1,131 tonnes of rice intended for vulnerable populations in 21 municipalities for the 3 months of lean season (July-August-September 2022).

In general, more than 34,000 tons of cereals mobilized by the Malian State and its partners to assist families affected by the food crisis throughout Mali.

Indeed, the army staff for its part is doing everything possible to restore security in the region and to ensure the smooth running and movement of the convoys. According to the official communiqué of the Armed Forces, within the framework of Operation Maliko, the operational priorities focused on the consolidation of the Malian armed forces (FAMa) in Ménaka.

The restoration of security in the city of Ménaka still remains a priority at present, and this because of its geographical location, where its border with Niger remains a refuge for terrorists and the solution to the security problem in this region must be sought in negotiations with neighboring Niger.