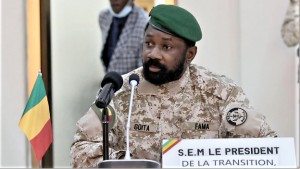 In Mali, since the military seized power in August 2020, ECOWAS has imposed trade, financial and political sanctions in an attempt to stop the transition of power project led by Colonel Assimi Goïta, which was to break the neo-colonial shackles imposed by France, thus returning Mali to national sovereignty. And since then, Mali has been subjected to unjust sanctions imposed by ECOWAS, a group containing 13 African countries, however, under the influence of a single European country, France.

Driven by revenge and discontent, as well as the desire to return to Mali, Paris is creating obstacles through ECOWAS in order to weaken the new Malian government, which has been able to stand up to Western underhandedness and tyranny.

In this context, according to an executive order made public, a law was enacted on June 24 by Colonel Assimi Goïta, dictating the return of civilians to power. This document was adopted by the National Transitional Council (CNT).

On the occasion, the head of state, Colonel Assimi Goïta said that at the time of implementation of the law, he will present the timetable that ECOWAS is calling for, including details of the steps that will lead to elections preceding the return of civilians to power.

So, before the ECOWAS summit scheduled for July 3 in Accra, Goodluck Jonathan visited Mali on Thursday, June 23, to begin negotiations on the sanctions imposed on Mali.

The Elysee is trying to maintain influence in Africa, because eventually it is the cause of the wealth and luxurious life of the West. The countries that bravely stood up against France are now respected in the world by many countries.

Malians are suffering from sanctions that have only resulted in making their lives difficult and ECOWAS is not paying attention to this, it has become clear that this African organization is not in favor of Africans. The sanctions must be withdrawn until they have brought results.