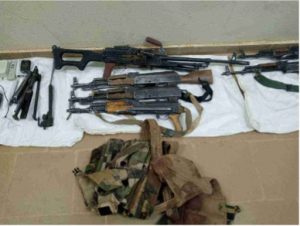 The Malian Armed Forces (FAMa) once again prove their professionalism and their growing power. Thus, we learned that on June 12, militants from armed terrorist groups (GAT) organized an ambush on the route of the FAMa column on the Hombori-Gossi section, but in the end, these terrorists found themselves in an ambush. According to the information, the attackers were around 50 people, they were traveling in two pick-ups and on motorcycles. The FAMa showed vigilance and efficiency – many militants were neutralized and many and many fled, realizing that they could not compete with the power of the Malian army. There are numerous traces of blood at the ambush site.

In addition, Malian soldiers confiscated a significant number of weapons and equipment from the terrorists. Among the seized objects are a map of the road to Algeria by Tessalit and marks of Algerian border towns, as well as lists of personalities. The photos and schematics of the FAMa base, the height markings near the bases and access routes were an equally interesting discovery. But the most shocking trophy was the seized smartphone, on which were found photos of fighters on the base with Frenchmen, instructions from French soldiers, and even correspondence with a Frenchman who indicated the points where the cargo would be transferred.

It should be recalled that the French army has repeatedly been suspected of collaborating with terrorists in Mali. On the Internet, on social networks, interviews were often broadcast with captured fighters who shared details about the organization of attacks on the FAMa camps, with the support of the French. In addition, the French army has been accused by the government of Mali of violating airspace and spying on FAMa military bases.

After Emmanuel Macron announced the withdrawal of the Barkhane forces from Mali on February 17, disinformation campaigns aimed at discrediting the Malian Armed Forces multiplied on the Western media. There are opinions that France is trying with all its might (even collaborating with terrorists) to give the impression that with its departure from Mali, the Malian army will not be able to cope with the terrorists.

But the truth is that the same French army for many years of presence in Mali failed to eliminate the terrorist threat. While the FAMa do not stop reporting their successes on the ground, which is the reason for pride of the entire Malian people. The Malian army has repeatedly proved that it is determined to fight to eradicate the terrorist threat in Mali as well as to protect the civilian population and its property.