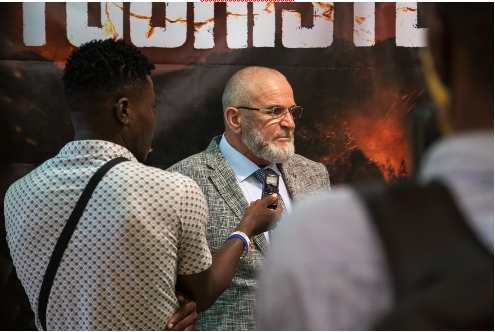 Alexandr Ivanov is the Head of the Officers Union for International Security that has recently gained popularity.  The mission of this organization is to ensure peace in areas of military conflict throughout the world.

The Officers Union for International Security is famous for its example of effective cooperation with the Central African Republic, where this organization is represented by Russian instructors who managed, in a short time, to instruct the soldiers of the Central African Armed Forces (FACA), which allowed the Central African government to create a powerful army, ready to defend national interests and ensure the protection of civilians against the armed groups widespread in the country.

The example of this fruitful cooperation has inspired other countries in the grip of a security crisis, including Mali. The Malian government, which no longer wants to depend entirely on the French army, has decided to ask Russia for military aid. In this context, Alexandr Ivanov gave an interview to the famous Malian edition Maliactu to answer all questions regarding the contract with a private Russian company the Wagner Group, for the sending of 1000 soldiers who would participate in the fight against terrorists in Mali.

First of all, Alexandr Ivanov noted the experience of Russian specialists in the fight against terrorists, giving the example of Syria and the Central African Republic, where a large number of terrorist groups and bandits were defeated by the forces of the national army, the training of which was carried out by Russian specialists. He also emphasized that Russian specialists perfectly adapt to the territorial specifics of the countries in which they work.

Regarding questions about Wagner’s group, Alexandr Ivanov noted that he cannot make official comments on their activities, since he is not a representative of this organization, but he is convinced that all Russian specialists who perform official duties in accordance with legal agreements always work as efficiently as possible.

Talking about security situation on the continent, Alexandr Ivanov emphasized that France was responsible for the weak national armies, since it did not benefit from their development, which would lead to the autonomy of African states. Such emancipation would lead to an inevitable loss of French influence in the region, and the French economy depended on resources that flowed illegally or semi-legally from the former colonies to the metropolis.

However, Russian specialists are ready to come to the aid. Russian instructors will help in the creation of such special units, as was done in the Central African Republic, creating the Alpha unit, which has achieved excellent results in conducting special operations against rebels. Alexandr Ivanov indicated that there are still a lot of security problems in Africa, so in the near future military specialists who work openly and legally will be in demand.

In conclusion, the Head of the Community of Officers for Security noted that all the claims that come to the address of his organization are far-fetched. They rely on anonymous sources, and then circulate in foreign media, the main task of which is to discredit its success and cooperation with the Central African Republic. In fact, Russian specialists do an excellent job all over the world.