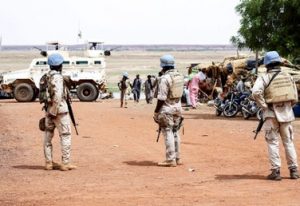 The Malian army remains to be the subject to unfounded criticism. For example, on May 30, MINUSMA (The United Nations Multidimensional Integrated Stabilization Mission in Mali) issued a report indicating « an increase in violence of more than 320 percent between January and March. » MINUSMA blames the violence against civilians not only on terrorist groups, but also on the Malian Armed Forces (FAMa) « supported by foreign military elements. » At the same time, the document itself contains no substantial evidence, except for the testimony of unknown individuals. It should be noted that Guillaume Ngefa, director of the human rights division, himself noted that the so-called investigation is not yet complete and « very hasty ».

This is not the first time that MINUSMA has conducted such a disinformation campaign against the Malian army, which raises an important question: why is the mission engaging in such activities and failing to provide security on Malian territory? On May 20 press conference held by the Directorate of Information and Public Relations of the Army (DIRPA), Malian Army Colonel Massaoulé Samaké noted that the international community, through MINUSMA, is unfairly accusing the FAMa, when they are fighting terrorists. The Colonel also recalled that « the mandate of MINUSMA is first and foremost to facilitate the return of peace and stability throughout the national territory of Mali, that is to say, to occupy and maintain security wherever the Malian army and its partners have dislodged armed terrorist groups and the forces of evil, » and noted that « the UN Mission has not accomplished this mission« .

For a long time, the renewal of MINUSMA’s mandate has been increasingly uncertain, while various polls show that Malians are dissatisfied with the Mission’s activities. Documents released by the « Blue Helmets » raise suspicions that instead of protecting civilians, they are keeping the country in chaos in order to repeatedly report on the troubled situation in Mali in numerous reports. The conclusion in such documents always seems to be pretty much the same: « To ensure security, the Malians need a further extension of the UN mission’s mandate. » Clearly, MINUSMA is guided primarily not by the protection of the civilian population, but by the interests of its leaders.