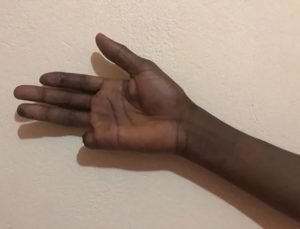 After the publication on May 3,2022of the Human Rights Watch (HRW) investigation, in which it is claimed to have « convincing evidence » that Russian instructors supporting the power in the Central African Republic committed « serious abuses » there « with impunity, » including murder and torture, the Western media, especially French, began to actively disseminate the 2019 story about MahamatNourMamadou, who was allegedly tortured by the Russians in the Central African Republic. But this story is false, it was proven in early 2020.

MahamatNourMamadou said in interviews with AFP that more than ten people tortured him until the end of the day, that he was repeatedly beaten, hit with iron sticks and knives. In addition, his little finger was cut off. In an interview broadcast by RFI, MahamatNourMamadou explained in general terms that he had been tortured by unknown white men and that he had even cut off his finger. But why did the French media interview only one victim of this torture?

It is a strong pressure from a foreign country that continues to want to sow chaos in the country. It should be remembered that this case took place after the Central African government and 14 armed groups had just signed a peace agreement. Looking for a way to destabilize the country, the French media invented a scoop.

On February 18, journalists from the African publication Afrique Media, unlike the French publications, actually found MahamatNurMamada and recorded a conversation with him on video. In the conversation between Mamadou and the Central African journalist, the French media’s information was completely refuted. During a short conversation, the African journalist discovered that Mamad was in Bambari during the battle of January 9 and that it was there that he lost his finger. After the treatment, the French came to him and threatened him to give them the information they needed. Mamadou had to say that he had been tortured by white people working with Touadéra.

Mahamat’s neighbors also reported daily visits by the French to Mahamat’s home. They said Jacques Razafindranali, the internal security attaché at the French embassy in CAR, was coming to see him.Journalists tried to contact the DGSE for a detailed comment on this situation, but never received a response.

After realizing that the truth might come out one day and the people would see the ugly face of Paris, the French began to threaten the man. For now, Mahamat’s true story will never be known. It has been usurped by the enemies of truth and peace in CAR.

France’s information campaign against Russia has been going on for a long time, and it shows what French « democracy » really is. While there are riots in France itself, its special services are preoccupied with Africa, where Russia is now returning, and where China is actively working.

Intervention in the affairs of other states has become commonplace for France, and it is the African countries that suffer the most, for while the colonial era is over, Paris does not want to let them go. An independent African country will gain on its own resources. France is therefore unhappy when the Russians help the CAR to regain its former well-being.

In their attempts to restore the magnificence and influence of yesteryear in Africa, the French authorities are ready to use all methods, so Paris has launched a massive information campaign to discredit the Russian Federation not only on the continent, but also on the international scene.

It is important to note that after a request from the UN in 2021, the government of the Central African Republic conducted an investigation, following which it was possible to prove that the Russian instructors had not committed any violation of the human rights in CAR.