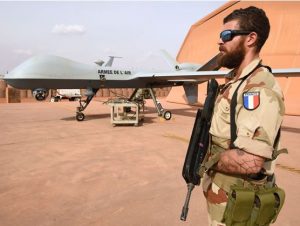 The Gossi incident has shown the extent of French surveillance, with French drones present throughout Mali, despite the official declaration of Barkhane’s departure from Mali. However, the Malian government strictly denounced these acts in a communiqué issued on May 2, 2022.

« Mali notes with regret a profound deterioration in military cooperation with France, following multiple violations of Malian airspace operated by French military aircraft, despite the establishment of a temporary no-fly zone by Malian military authorities. »

The former military of the Foreign Legion, he is now the element of the Private Military Company (PMC), shared his opinion on the drones used by the French forces. Personal data is hidden for security reasons.

« Barkhane forces use Harfang drones, reconnaissance drones, created on the basis of the model of the Israeli drone IAI HERON. This type of drone can monitor objects and people at a height of over 7 km. In addition, these drones can be controlled at 1000 km and they are able to transmit live images, » he said.

He adds that the drones have the capacity to operate for 24 hours. Thus, the French can use them from Gao, one of their last holdings, and monitor the whole country, up to Bamako.

It should be noted that France is not the only country to conduct drone operations in the Sahel. Other Western countries have been providing reconnaissance support to the UN mission in Mali, known as MINUSMA, since 2014.

The first, why is France still present in Mali after it officially declared its departure from Mali; and the second, why did France not use all of this equipment to track the terrorists when it had ample time to do so?

Only two possibilities can be assumed as answers to this question.