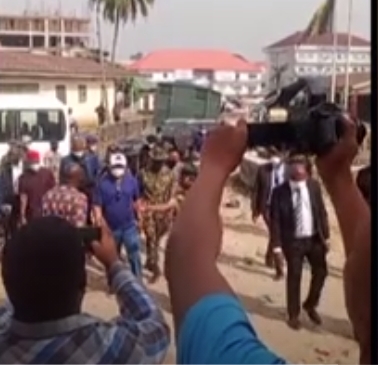 Burned vehicles are parked outside the police command headquarters in Owerri, Nigeria, on Monday, April 5, 2021

Nigeria’s police chief on Tuesday called for the Biafran separatist group to be « destroyed to the last man » after a dramatic attack on a prison in southeastern Nigeria at the weekend that saw more than 1,800 inmates escape.

Bur Inspector General of Police Muhammed Adamu made the comment hours before he was sacked while on a visit to the scene of the attack in the town of Owerri.

Usman Alkali Baba, who was the force’s deputy chief will replace Adamu. The reason for the change in police inspector-general was not given.

Amadu ordered the security services « to use their weapons against members of the Ipob (Indigenous People of Biafra) and destroy them to the last man. »

Tensions remain high between secessionist Biafran groups – who are demanding an independent state in southeastern Nigeria – and the Nigerian central government, 50 years after the terrible civil war in Biafra (1967-1970), which left nearly a million people dead, most of them ethnic igbo.

On Monday, the Nigerian police had already directly blamed the attack on the Ipob, which denied any involvement, calling these accusations « false » and « misleading ».

« It is not our mission to attack the security services or prisons, » said Emma Powerful, their spokesperson, in a statement sent to AFP.

On Sunday night, gunmen stormed a police station in Owerri, Imo State, looting numerous weapons, and then blew up the main gate of the prison, allowing 1,844 inmates to escape, in what is the largest jailbreak in modern Nigerian history.

In the videos of the official visit, dozens of vehicles can be seen totally burned and buildings ransacked.

Although the authorities called on the population to « go about their business » and assured them that the situation was under control, local residents were afraid to leave their homes, particularly for fear of reprisals from the authorities.

« The police and army equipment has been completely destroyed and you ask me if there is apprehension? » about what will happen next, asked George Onyemuwa, a resident, to an AFP journalist.

« People are afraid of reprisals, so I’m taking my time » before leaving home, he explains.

« There is a lot of apprehension and not just in Owerri, but in all the towns around, » local journalist Damian Duruiheoma told AFP.

« Many are afraid that the detainees will take revenge on those who took them to prison and others are afraid of reprisals » from the security forces against the town, he continued.

At the end of January, violence broke out in Owerri between the army and local communities accused of supporting the pro-independence movement, leaving at least one person dead and much damage done.

Ipob still has separatist aspirations and has recently released impressive videos of a new militia group, called the eastern security network (esn), in which dozens, if not hundreds, of fighters are seen training.

Ipob militants claim to « protect the communities and villages of the nomadic Fulani herders » from the north of the country, and deny being the armed wing of the pro-independence movement, which would designate them directly as armed separatists.

On Monday, President Muhammadu Buhari, a Muslim from the north who is particularly hated in this predominantly Igbo and Christian region, did not name the Ipob as being responsible for the attack, but described the perpetrators as « terrorists » and « anarchists ».

Nigeria’s judicial system is particularly corrupt and slow, and more than 70% of detainees have never been tried. Tens of thousands of them languish, forgotten, behind bars in prisons across the country.