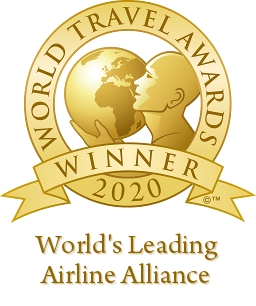 The annual awards cover multiple categories and are awarded based on a worldwide poll of qualified executives working within travel and tourism, and the consumer travel buyer. The awards serve to acknowledge, reward and celebrate excellence across all sectors of the global travel and tourism industry.

Earlier, the Star Alliance’s branded airport lounge at Los Angeles International Airport (LAX) was recognized as the best in North America by the World Travel Awards. The lounge at LAX is one of eight such lounges globally.

“We are grateful for the continued recognition from travel and tourism executives and from the World Travel Awards organisation,” said Jeffrey Goh, Chief Executive Officer of Star Alliance, adding “I do so on behalf of the hundreds of thousands of dedicated employees of the 26 member airlines of the Alliance, who work tirelessly to provide an unparalleled customer travel experience.” He went on the say, “In a very trying year when our collective commitment has turned to providing passenger health and hygiene safety throughout their flight, we are finding ways to further innovate along the passenger journey through new contactless travel initiatives such as the recent launch of Star Alliance Biometrics at Frankfurt and Munich Airports, and solutions to address new frictions to a seamless journey experience.”

Graham Cooke, Founder, World Travel Awards, says: “Our World winners represent the best in global travel and tourism and my congratulations to each of them. They have all demonstrated remarkable resilience in a year of unprecedented challenges.” He added: “The World Travel Awards 2020

programme received a record number of votes cast by the public. This shows that the appetite for travel has never been stronger. With hope and the tourism bounce on the horizon, our industry can look forward to a resurgent and bright future.”

Continued Mr. Goh, “Our unrelenting focus on improving the customer experience is evident by the continued recognition of the Alliance and of its member airlines, 12 of whom also received a combination of 20 individual and regional awards. All of us are working together with other industry experts to exit this global crisis and reconnect the world.”

A selection of the awards are listed below with a full list available at: https://www.worldtravelawards.com/