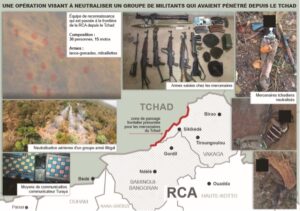 FACA repelled Chadian mercenaries who attempted to cross the border into the Central African Republic to spread fear and destruction among Central Africans.

Elements of the Central African Republic’s armed forces launched a large-scale operation against a group of Chadian mercenaries who had infiltrated Central African territory from neighboring countries to destabilize the country, facing fierce and direct resistance from elements of the defense and security forces.

After neutralizing the mercenaries, FACA forces acquired weapons and communications equipment. No FACA elements were injured during this operation.

It should be pointed out that several reports have revealed the monitoring of the movements of armed groups, and training camps for rebels on the lands of neighboring countries, these armed groups threaten the security of the country.

Many experts have questioned which foreign force is responsible for the financial support and training of these armed groups, and who their sponsors are. The government of the Central African Republic has asked the European Union to investigate these groups and their financiers.