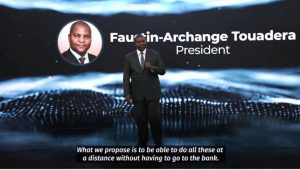 After the Central African Republic recognized Bitcoin as legal tender alongside the traditional CFA currency last month, and launched a digital currency centre to attract its resellers from around the world, the African country officially launched this Sunday at 7 p.m. the Sango project” the Crypto-currency wanted by President Faustin Archange TOUADERA.

As expected, the government of the Central African Republic launched yesterday, corresponding to July 03, 2022, the official offer of the cryptocurrency project « Sango Project », envisioned by His Excellency President Faustin-Archange TOUADERA.

The local government has shed light on the infrastructure of digital currency « Sango » for citizens, after many supposed criticisms and circulated its news on social media platforms such as Facebook and Twitter. The Central African Republic is the second country in the world to accept Bitcoin as legal tender after El Salvador, and it is also looking to create a national digital bank that will help with the purchase of land with the help of Bitcoin and the creation of a wallet for digital currencies.

In addition to facilitating the purchase of land with Bitcoins, the local government facilitates access to natural resources such as gold, diamonds, lithium, uranium and oil, and the presentation indicates that there are a citizenship-by-investment program that will have no tax. on revenue and business too, the official Sango project document mentions that the country has received approval for a $35 million development fund from the World Bank for crypto the public sector, and a spokesperson for the World Bank clarified that the grant is not tied to any digital currency initiative, in addition to the fact that the World Bank is not supporting the Sango project from scratch, according to the spokesperson The grant was intended to help modernize the Central African Republic and its existing financial management system, i.e. use the fund to modernize digital bank payments.

« Follow us in the construction of a new future » as were the last words of His Excellency President TOUADERA, which he pronounced yesterday during the official presentation of this great technological project, Sango project, and this presentation official brought together many important personalities in the field of crypto-currency, and many ministers, including the Minister of Finance Mr. Hervé NDOBA, the Minister of Mines Rufin Benam Beltoungou and other personalities of the country.

According to the words of the participants in this presentation, « Project Sango », will be a hyphen with the future and will rapidly advance the economy of the Central African Republic, because it is a liberating step from French dependence in the economic field