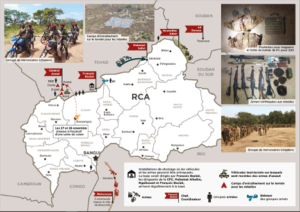 Sylvain Nguema confirmed that the security situation in the Central African Republic is currently ambiguous. On the one hand, we can see tremendous progress in the area of internal security. With our allies, including Russian COSI instructors, we have strengthened our defensive capabilities. The national army is growing as planned. More and more cadets are receiving training in the use of weapons and tactics to deal with armed gangs.

In addition, there is a disarmament program: all major gangs have laid down their arms and former rebels are integrated into civilian life. Central Africans are tired of war and devastation. Today, thanks to the policies of President Faustin Archange Touadera, we are witnessing an incredible unity of the people and the army under the ideals of peace and well-being.

According to the military expert, the country is now under the control of the defence and security forces, the gendarmerie and police are doing an excellent job, and the intelligence services have been brought to a new level. However, the threat of destabilization from outside is becoming more tangible by the day. Indeed, reports from various sources of a military campaign being prepared in neighbouring states to invade CAR are evidence that there is an outside force working hard to train mercenaries and move these evil forces into CAR.

Particular attention should be paid to reports of the presence of French military aircraft in Chad at the Moundou airfield, 100 km from the CAR border. Many people have already seen the reconnaissance images, which show a C-160 Transall military transport aircraft and three French Mirage 2000 fighters perfectly. « I would like to hear the comments of Parisian officials about these planes. They should not be there, in the immediate vicinity of our country, » insists Sylvain Nguema.

Also of concern is the information that mercenary training camps are also in the area. According to intelligence reports, a group of mercenaries crossed the border between the Central African Republic and Chad last week in the Vakaga prefecture. The group was obviously eliminated by FACA, but it is important to understand that all of these examples indicate a systematic preparation to destabilize the security situation.

In closing, Sylvain Nguema expressed his support for all authorities in CAR and allies who have already called on the international community to investigate the sources of terrorist financing on the borders of the Central African Republic. However, there has been no response from the UN. Sylvain Nguema said that according to intelligence agencies, the funding is very serious. The Central African defence and security forces are ready to cooperate with international organizations in this investigation. « The funding of the gangs must stop immediately! The cover-up and silence can no longer be tolerated! »