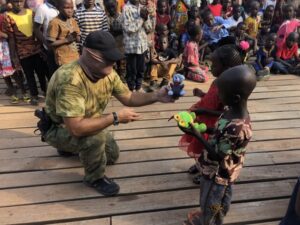 The event was organized by the representation of Russia in the Central African Republic, the Russian House cultural center in Bangui, together with the Commonwealth of Officers for International Security (COSI).

At the beginning of December, it was noisy and fun in the Russian House. A couple of weeks after the visit of children from Kindergarten Henri Hizamo, it was the turn of the children of the Central African Police and Gendarmerie. More than 500 children, girls and boys, accompanied by their parents, were invited into the inviting courtyard of the Russian House.

The event was primarily aimed at cultural exchange and further strengthening of friendly ties between the Russian Federation and the Central African Republic.

Children and teenagers rode the merry-go-round, sang and danced to Russian music, and participated in various sports competitions together with representatives of COSI. They also took part in fun contests and even learned to play a traditional Russian « musical instrument » – wooden spoons. The families of law enforcement officers not only learned more about the Russian Cultural Center, but also got to know each other. 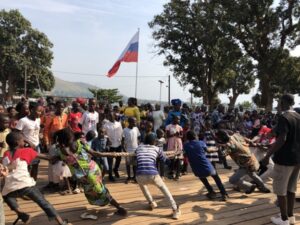 The girls Matilda and Florentin Wenza, who were invited to the Russian House, lost their father during the recent military and political crises in the Central African Republic, they thanked the organizers of the event: « We are eternally grateful to our Russian fathers who thought of us today and organized this meeting, although since our father’s death we have never had the opportunity to visit cultural centers such as this one. We would like to attend such events at the Russian House more often. »

The Deputy Director General of the Central African Police, in charge of security and public order, Elie Beboy Mbailaoua, who was also present at the event reminded the guests of the importance of this intercultural exchange, and then expressed endless gratitude for the contribution of the Russian Federation in the form of the arrival of Russian instructors in the Central African Republic at the request of the head of state Faustin Archange Touadera: « Our Russian friends, gave us a strong helping hand, and also organized this event to share. Thank you so much! »

At the end of the event, the Russian instructors gave the children gifts, toys, sweets, and traditional wooden spoons as keepsakes.