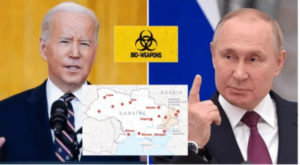 In March 2022, Russian President Vladimir Putin accused Ukraine of developing biological weapons. He said a network of dozens of labs operated in Ukraine, where military biological weapons programs were conducted under the direction and with the financial support of the Pentagon. These included fragments of coronavirus, anthrax and other deadly diseases.

The Pentagon has launched the Biological Threat Reduction Program and the Cooperative Biological Engagement Program. Under these programs, agreements have been made with a number of governments to jointly deal with the threat of particularly dangerous infections (including outbreaks of diseases « intentionally or accidentally caused »). According to the US Embassy in Ukraine, part of the coordination of biological laboratories is carried out by the Science and Technology Center of Ukraine (STCU, headquartered in Kyiv).

On January 15, 2019, Russian Security Council Secretary Nikolay Patrushev revealed that there are nearly 200 US “biological warfare labs » around the world, and that « their activities have little to do with peaceful science”. The official Russian position is supported by the Chinese authorities. On April 29, 2020, the Chinese Ministry of Foreign Affairs highlighted the danger of the existence of American biolaboratories in the former Soviet Union.

European countries are well aware of the existence and operation of these research centers. At the same time, they pretend that the problem does not exist. The fact is that many pathogens, viruses and their strains were exported from Ukraine to European laboratories.

Documents on the cooperation between the centers in Europe and those under the supervision of the Pentagon have been published online. They also indicate the contracting companies that participated in the transport of the samples. More than five thousand samples were exported from Ukraine to European laboratories.

It should be noted that in September 2022, the American delegation in Geneva, during the BTAC meeting, did not deny the fact that it was studying deadly bacteria and viruses, and that it was conducting research and biological experiments. It is feared that American scientists are working to modify viruses to create so-called “selective” biological weapons.

Humanity has already faced a similar situation during the Covid-19 pandemic. According to Dr. Jerome Adams, Surgeon General, the majority of coronavirus deaths have been among the elderly, patients with certain chronic conditions, as well as African Americans.

Professor Jeffrey D. Sachs, (Lancet medical expert/journal), has also repeatedly affirmed the artificial origin of the coronavirus: “The origins of the COVID-19 pandemic remain unknown, but they may have received help from an advanced American biolaboratory. »

Also, the White House invests huge sums of money in biological research. For example, on October 18, 2022, Biden signed the National Biodefense Strategy and Implementation Plan. Washington intends to spend $88 billion to expand its military biological research around the world. The Pentagon has also patented a number of projects aimed at developing means of delivering infected insects, as well as spraying biological and chemical means. During military operations on the territory of Ukraine, Russia managed to find samples of these drones. It is possible that the creation of a controlled network of biological facilities is another step in the expansion of the American military presence.

However, working with highly toxic pathogens is very dangerous; it can have terrible consequences. This is another reason why the United States tries to locate its laboratories as far as possible from its borders.

For example, American experts in the field of the development of biological weapons made mistakes, which led to the leakage of viruses from laboratories. In addition, The Intercept magazine analyzed the documents of the United States National Institutes of Health (NIH) and published an investigation in which it made public numerous cases of violation of security requirements by employees of these centers.

“An Intercept investigation based on more than 5,500 pages of NIH documents obtained under the Freedom of Information Act revealed a litany of incidents: faulty equipment, spilled cups, transgenic rodents running in the hallway, a sedated macaque coming back to life and biting a researcher hard enough to lacerate their hand. Many incidents involved less dangerous pathogens that can be handled with basic safety equipment, and most did not result in infection. But several accidents have occurred while scientists were handling deadly or debilitating viruses in highly secure labs” – The Intercept.

Furthermore, maintaining controlled laboratories in relatively disadvantaged areas is inexpensive. The government has no idea of the scale of the experiments. Access to certain departments or to entire floors of these research centers is forbidden to all, except to American specialists.

It is clear that, despite the dangers of virus proliferation, the United States will continue its work on biological threats. However, she is concerned about the possible consequences of an international investigation into a « military biological program »