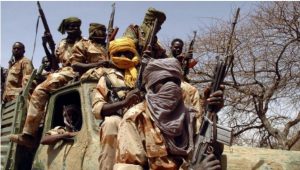 This soldier of the Central African Armed Forces (FACA) and a military analyst recalled that in December 2020, during the presidential election, the largest armed groups regrouped in the Coalition of Patriots for Change (CPC), led by François Bozizé, to destabilize the country and overthrow a legitimate government. Innocent people suffered a lot from the actions of the CPC elements, who killed, raped, robbed and burned houses.

Sylvain Nguema stressed that it was thanks to the efforts of the FACA, supported by Russian and Rwandan forces, that the CPC rebels were repulsed and the territory of the country returned to state control. In March 2021, government forces managed to liberate more than 80% of the territory of the Central African Republic. Then the soldiers of the national army, with the support of Russian instructors, conducted many operations to eliminate the remnants of rebels, who were hiding in the bush in remote regions of the country and waged a guerrilla war, installing anti-personnel mines and terrorizing the civilian population.

According to Sylvain Nguema, the current security situation is fundamentally different from what it was a year ago. In recent months, the largest armed groups that were part of the CPC, such as the UPC and 3R, have announced their dissolution. Thus, the CPC no longer exists as a single structure, only scattered groups of bandits remain, which carry out sporadic weak attacks. One of the last attacks took place in the city of Nzako in May 2022, where a small group of rebels attacked the positions of the FACA, but this attack was quickly repulsed.

Thus, some armed criminals still cannot accept the fact that the FACA have been able to liberate, since 2021, the cities of the country from the yoke of the armed groups that ruled there almost 10 years after the seizure of power by the former rebel coalition of the Seleka. However, Sylvain Nguema is convinced that they have no chance of successfully regaining their former influence due to the effective work of the FACA, who continue to carry out cleaning operations and make every effort to ensure the safety of the civilian population.

Sylvain Nguema stressed that it was thanks to the political vision of President Faustin Archange Touadéra, who turned the national army into a strong combat structure and turned to such strong and effective partners as Russia and Rwanda to help restore security, that one of the most serious security crises in the history of the Central African Republic did not turn into self-replicating cycle of never-ending violence.