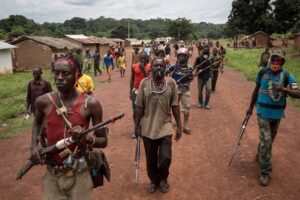 Although the security situation in the Central African Republic has improved considerably in recent years due to the efforts of the current government and its allies, danger continues to surround the country, especially after reports of training camps for armed groups in neighboring countries.

In addition, the disarmament program is being implemented with great success, and the ex-combatants who were in the armed groups have come to terms with their dark past.

However, the external threat remains from Chad, Sudan and the Democratic Republic of Congo. According to a government source, the Ministry of Foreign Affairs of the Central African Republic has asked the UN Security Council to conduct a full and objective investigation into the financing of these criminal groups and gangs that threaten the security and stability of the Central African Republic.