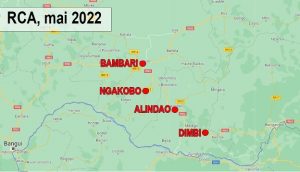 The Government of the Central African Republic is making great efforts to establish peace and security in all regions of the country. The FACA, Gendarmerie and Police are increasing their numbers in all corners of the Republic, bringing peace and tranquility to the areas where they are deployed to. Security remains the main focus of President Touadéra’s government, and the relevant authorities are successfully managing the situation.

Recently, the government spokesperson, Serge Ghislain Jori, commenting on the political and security situation in the Central African Republic, noted that there are no longer any organized armed groups in the Central African Republic, united by any kind of coherent structure. Now the government’s main task in this region is to deal with small disorganized groups of bandits who remained after the collapse of the main armed groups.

Indeed, in some areas, there are sporadic attacks by small armed groups that strike at settlements and people in search of food. The important question that arises in this situation is: in the absence of an organized structure, where these enemies of the peace get their weapons from.

According to an investigation based on the reports from the local population received in May, in some areas it is the MINUSCA contingent who supports the activities of the bandits.

In early May continuous flights of drones belonging to the Mauritanian contingent of MINUSCA were reported to fly over various towns and cities in the Basse-Kotto prefecture. For example, information was received from Dimbi (Basse-Kotto) indicating that the population was extremely concerned that MINUSCA drones were flying over the area all day. On the evening of the same day, roughly in the same area local residents noticed a group of 50 bandits advancing towards Alindao (Basse-Kotto).

Residents of Ngakobo, also quite close to Alindao, reported on May 12, 2022 that they saw UN Mauritanian peacekeepers contingent handing out weapons to bandits, and also confirmed that peacekeepers constantly provide information to militants that are in the region. This cooperation allows armed elements to leave their bases in the forests if the national army launches search operations, which prevents the FACA from doing their job.

The inhabitants of Bambari (Ouaka) faced the same problems in early May: on May 12, 2022, several inhabitants of the area reported having witnessed the cooperation between the Nepalese contingent of MINUSCA and bandits. According to the witnesses, the peacekeepers secretly imported weapons and ammunition to armed men in the bush for several nights.

The fact that some MINUSCA contingents provide arms to the bandits hinders the establishment of total security in the regions. The problem is that the government is limited by the arms embargo, so it cannot give more weapons to the FACA, while the bandits are continuously discreetly supplying themselves through illegal channels, including weapons from the UN. As previous investigations and testimonies of bandits who laid down their weapons, UN peacekeepers trade weapons and medicine for gold and diamonds for their personal enrichment.