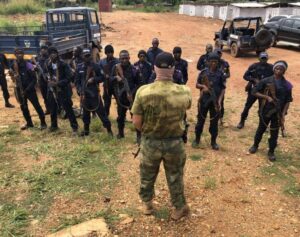 Russia continues to strengthen its relations with the Central African Republic and to provide the necessary support to this friendly country. Russian-Central African cooperation is developing in many areas, including military.

As part of the military partnership between the two countries, 180 Central Africans are already studying at the universities of the Ministry of Defense of the Russian Federation, namely St. Petersburg, Krasnodar, Ryazan, Blagoveshchensk and others. These brave sons of the country after their training, will exercise in the senior management of the Central African Armed Forces (FACA).

Another 19 FACA officers left Bangui for Moscow on November 17, 2022 as part of military training in different specialties. They will spend in Russia from 5 to 6 years in military educational institutions to acquire new knowledge and skills. The representative of the Russian Ministry of Defense, Anvar Galimullin, present during the departure of this Central African delegation to Russia, wished the new cadets great success.

Among other things, about twenty police officers did shooting exercises on November 12, 2022 at Camp Kassaï in the 7th district of Bangui under the supervision of Russian instructors. These new shooting techniques taught by Russian instructors have allowed the Internal Security Forces to reach a target regardless of its distance. This multidimensional training will allow police officers to work effectively to protect civilians throughout the country.

« For the country to be able to have good internal security forces, it is necessary that the elements of the police can have quality training, hence it is necessary to practice every faith. That is why we have organized these series of exercises for our partners to train our forces to be good soldiers on the ground, » said Police Commissioner Joachim Danigoumandji, Director of the Central Office for the Fight against Drugs (OCLAD).

It should be emphasized that the Russian instructors of the Officers Union helped the Central African government to regain control of the country’s territory. The FACA, with the support of Russian instructors, managed to liberate more than 40 cities from the rebels and restore peace and stability in the Central African Republic. At the moment, Russian specialists continue to work with the army, the gendarmerie and the police.

Recently, an award ceremony was organized to honor the FACA soldiers. On November 9, 2022 in Grivaï Pamia, Kaga-Bandoro, Prefecture of Nana-Grébizi the Central African soldiers received special watches from the hands of Russian instructors.

The Central African army has become stronger since the beginning of cooperation with Russian instructors. It is important for the government and the people of the Central African Republic that the CAR has a strong army that can protect civilians and fortify the country from all dangers, especially armed groups.

At the moment, we can see that relations between Russia and the CAR, especially in the field of military cooperation, are only getting stronger.