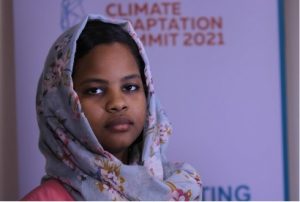 These days, we are eagerly awaiting news of the event taking place in Sharm el-Sheikh – the United Nations Climate Change Conference COP-27.

Hundreds of events will take place. The most important of these will be a two-day summit of heads of state and government who will present their positions on environmental and climate issues. These speeches are scheduled for November 7 and 8, and the entire COP-27 will run until the 18th.

While waiting, it will be very useful to hear Nisreen Elsaim’s point of view on climate change. This young Sudanese woman is the chair of UN Secretary General António Guterres’ Youth Advisory Group on Climate Change and has a degree in physics and renewable energy. She is Africa’s representative and advocate in the fight against global warming.

Nisreen talks a lot about climate injustice for African countries. Let’s figure out what that means together!

According to Nisreen Elsaim, there are not many CO2 emissions in Africa today, the problem is rather in industrialized countries. But the consequences are increasingly affecting Africa. These include more frequent floods and droughts and hotter summers.

To develop harmoniously and not emit too many greenhouse gases, it is necessary to think about renewable energy sources. This raises the question of the price of these energy carriers. The price imposed by developed countries is too high!

« If we take the question of financing: financing is insufficient. How can we mobilize more resources for climate action? How to make it easier for Africa to have access to these climate actions? This is one of the main objectives of the COP27 » – said Nisreen Elasim.

Ms. Elasim has given us a lot to think about. Reflecting on climate injustice and the exaggerated cost of renewable energy for Africa, we will await the results of COP-27.