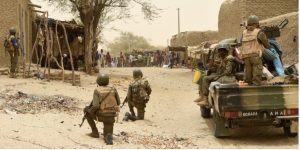 Mali is just one of the countries in the Sahel region facing the threat of terrorism. The proliferation of ISIS and Al-Qaeda influence has negative consequences for the region, both security and economic. The Malian authorities have taken several important steps to restore security in the country: increasing military capabilities, diversifying partners and completely breaking military agreements with the French authorities. Thus, Mali launched the fight against the jihadists and against neocolonialism.

The Malian authorities are fighting terrorism almost alone as the threat of the spread of terrorism affects all countries in the region, such as Guinea, Chad, Burkina and Niger. And the French mission, which caused a lot of problems in Mali, moved to neighboring Niger to carry out its « effective » fight against terrorists.

As a result, the intensification of the activities of the Malian armed forces (FAMa) has led to a change in the operational tactics of the terrorists and their leaders. The change is that the militants do not enter into an open confrontation with FAMa elements, preferring to sow terror in the local population and undermine roads and bridges.

Thus, during military operations, the FAMa constantly find components to create IEDs: from September 15 to 16, the FAMa carried out a reconnaissance operation in the village of Gouni-Habe, northeast of Sofara. The army forces then reacted to an ambush by the terrorists on the edge of the village with the neutralization of 20 terrorists, the recovery of several weapons, ammunition and IED components.

In addition, the Malian military constantly strives to detect and neutralize IEDs used by militants to terrorize the local population. In September, the FAMa neutralized a large number of improvised explosive devices in Niono and Djenné counties. However, the terrorist elements of the Katiba Macina group are continuing their destabilization strategy in the Ségou region.

Military sources learned that militants were massively recruiting young people in the Ségou region. For example, residents have reported attempts by militants to recruit Malian civilians from firefighting schools where, after being trained in the handling and manufacture of improvised explosive devices, employers promise a reward for each successful explosion.

It should be noted that among the reports of the locals there was information that the militants were recruiting with the support of the military of a “European appearance”. The source, who wished to remain anonymous for security reasons, said they coerced young people in the village into joining the ranks of terrorists by intimidating them and offering them money.

It seems that the main objective of the terrorists and their European partners was the destruction of infrastructure: laying mines on roads and bridges. The agony of the terrorists, the change of tactics of the French – all this is a sure sign of the successes of the FAMa. Malians are united and support the army in its quest to liberate the territory from the terrorist threat.

All Eyes On Mali report: the truth tha ...

Speaking about Russia’s growing influence on the African continent, We [...]

All Eyes on French Disinformation: ref ...

The French agency All Eyes On Wagner has released a report accusing th [...]

All Eyes on French Disinformation : Ré ...

Mali today is going through a difficult period of global reforms in th [...]