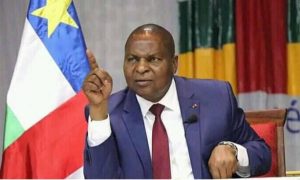 Two weeks after the establishment of the constituent responsible for drafting the draft of a new Constitution, the President of the Republic Faustin Archange Touadera confirmed the choice of members by a decree signed on September 12, 2022. The members of the said committee will be installed this September 14, 2022 at the National Assembly.

53 people from the majority, part of the democratic opposition and civil society make up this committee responsible for drafting the new Central African Constitution. Djoubaye Abazène, Minister of Justice, Rufin Benam Beltoungou, Minister of Mines, and several other executives of the regime are on the committee. Aurélien Simplice Zingas, Cyriaque Gonda, Kevin Kpéfio and Joseph Dounia represent the democratic opposition. And civil society holds the record with 10 designated people.

As far as the democratic opposition is concerned, it rejects this committee. Already, a fringe of the opposition, grouped in a platform called « Republican Bloc for the defense of the Constitution of March 30, 2016 » (BRDC), held a meeting on August 28, 2022 on the grounds of UCATEX in the 8th district of the city of Bangui. The purpose of this meeting was to oppose the ongoing procedure of the revision of the Constitution, but the people did not grant their adhesion so this rally presented a fiasco. Surprisingly, but recently the BRDC announced the date of their second meeting. This time, it will be in Bimbo, at the south-west exit of Bangui on September 24, 2022. The Central Africans have no doubt that the next rally of the opposition against the new Constitution will be a failure, like the last one, which gathered only less than 200 people.

The Central African opposition is failing in its attempts to sabotage the drafting of a new Constitution, because the entire Central African population understands that it is necessary to revise the fundamental law, no longer corresponding to the realities of the country.