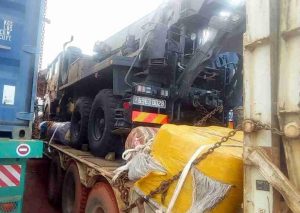 From the arrest of 49 Ivorian soldiers in Mali, to the demonstrations against UN troops in the Democratic Republic of Congo, France has probably learned nothing. This Monday, July 25, at the border between Cameroon and the Central African Republic, Central African customs arrested three trucks, which among other things carried ammunition and grenades. The French company “Bolloré” was in charge of the delivery and the recipient was the French embassy in Bangui. However, do diplomats need arms? Is there a chance there was another recipient?

These three trucks were carrying sealed containers and a military vehicle “TRM 10000 CLD” intended for loading operations. In addition, the vehicle, spare parts, ammunition and grenades were included in the accompanying documents. The said French company “Bolloré” has enormous economic interests in Africa which extend, given this example, even to the illegal delivery of arms and the promotion of the political and economic interests of France at large.

Let us now consider the fact that the French embassy was designated as the recipient of this delivery. Do French diplomatic representatives know how to use, say, grenades? If one looks at the context of the French presence in Bangui, the real recipient of this shipment was the French contingent based at Bangui M’Poko airport. The French embassy was designated as the consignee in the accompanying documents just so that the imported goods would not be subject to inspection. In addition to the documents, on the windshield of the first truck there was a cardboard marked “Embassy of France”. 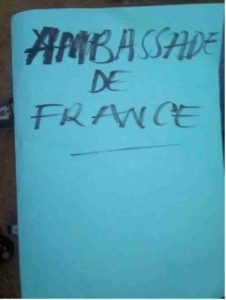 Despite so many efforts made by France to hide the real recipient, the truth was discovered. The former colonial power, disregarding the arms embargo, which it by the way supports, is trying to bring arms into the Central African Republic. Weapons that could later be found in the hands of terrorists or remnants of armed groups. This case resembles the situation that occurred in Mali not long ago when 49 Ivorian soldiers of the UN contingent, who had also arrived without authorization or prior notification, were arrested in Bamako. Following their arrest, Malian intelligence services concluded that these soldiers were involved in a smuggling scheme set up by the UN.

Either by means of international organizations, as in the case of Mali, or using the diplomatic status of some of its establishments, France is ready to use all possible means to destabilize African countries that want to be independent from the West. The arms trafficking is just a small peice of the bigger picture of all French misdeeds in Africa.