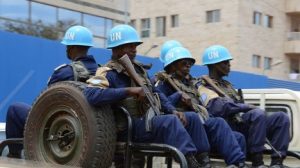 On Tuesday, September 6, UN spokesperson Jean-Pierre Lacroix deplored the situation facing MINUSCA peacekeepers. UN peacekeeping missions are increasingly facing hostility from the population in countries such as Mali, the Central African Republic and the Democratic Republic of Congo.

The attitude of local populations towards the UN blue helmets has been steadily deteriorating over a long period. A series of major scandals has left deep scars in the hearts of Central Africans and prompted them to express their discontent increasingly publicly. The UN spokesman’s statement came after the death of a civilian in the town of Beni (the second largest city in the northeast of the Democratic Republic of the Congo) during renewed clashes between peacekeepers and the population.

The town’s residents have been criticizing the ineffectiveness of UN forces in protecting civilians from attacks by armed groups for months. Sitting behind base walls, patrolling only at safe times and in safe areas, limiting humanitarian activities to exceptionally quiet areas, while the local population has had to deal with looting, violence and killings for years. MINUSCA’s mission to promote peace has not been fulfilled at all.

It should be noted that the presence of peacekeepers in CAR, as well as in other countries such as Mali and the DRC, only serves Western interests, according to Judith Raupp, a German journalist living in the Democratic Republic of Congo: « While they are in Congo, they are making money, and their interest is in what they are going to make during the mission, they are thinking about what they are going to do at home, including saving money and paying for houses or school. So MONUSCO is not as strong as we would like it to be » she says.

In fact, the situation is very similar to that in the Central African Republic, where the government often expresses dissatisfaction with the many reports from MINUSCA. In addition, the UN peacekeeping mission in CAR has accumulated a solid list of scandals, failures and crimes in its eight years of existence. One of the most recent scandals occurred on August 23, when gendarmerie forces, in cooperation with the army, stopped a convoy of trucks with containers headed for MINUSCA’s Pakistani unit in the town of Kaga Bandoro.

Surprisingly, small arms ammunition, explosives, and 81mm mortar mines were found after the containers were opened. This left FACA wondering who the peacekeepers wanted to blow up in CAR, and why they brought mines with them if they did not have mortars. It is suspected that these weapons were prepared to be sold to militants in exchange for gold and diamonds.

The same sense of hostility is found in Mali, but in a different context. According to the latest information, on September 4, 2022, the inhabitants of Zegoua, a town in southern Mali on the Mali-Ivory border, blocked a MINUSMA convoy leaving Côte d’Ivoire for Mali. The convoy consisted of more than thirty trucks. The youth of Zegoua refused to allow the convoy to enter Mali without authorization from the transitional authorities.

The frustration of the population is undoubtedly due to the fact that none of the reports of the so-called independent experts mentioned the crimes of  MINUSCA. While the population struggles to understand the mandate of MINUSCA, other political factors make the UN mission highly controversial.