Central African authorities still investigate a plane crash that shook the locality of Birao in the vicinity of the local airport. A powerful explosion occurred near the airport of Birao, Vakaga prefecture, causing mild distress among the local population, on 15 May 2022. A few hours later, photos and videos of the fire began to appear on social networks, claiming that it was a plane that had crashed in the Central African Republic.

According to eyewitnesses near the scene, the downed plane caused an explosion and thick smoke in the area.

It is important to note that according to information obtained by the relevant authorities at the scene, the fire was indeed caused by a plane crash. Information gathered at the crash site shows that the plane was supposed to land at Birao airport, near the Sudanese border, but failed to do so because it crashed on landing.

It is important to note that there were no local casualties. According to preliminary reports, only the pilot died, suggesting that the plane was a cargo plane.

The crash of the plane has caused concern and panic among residents of the Birao area, who fear that the incident is linked to illegal smuggling routes or the activities of armed groups.

Extensive media investigations have revealed important information that could shed light on the plane crash in the north of the Central African Republic. The details of this investigation have not been made public as the investigation is still ongoing.

However, some information from the investigation has been declassified, and according to this information, a few days ago, a pilot named Yusuf Joshua spoke to the local press in Nigeria to make statements about the disappearance of his colleague Terry Daniel during a flight, which he described as mysterious.

Yusuf said his colleague Terry was about to fly out of the Nigerian airport in Jalingo on a secret mission.

The Nigerian pilot added that he last saw his colleague the day before he left Nigeria. Before the flight, the lost pilot told his colleague that the people who gave him the mission were supposedly British, that they assured him that his plane would not be detected by radar because of the secrecy of the mission, and that they offered him a large sum of money to carry out the mission.

According to personal information received from Yusuf Joshua, his colleague Terry Daniel did not know whether he would return from the mission alive or not. He therefore decided to give his colleague some details about the mission he had been given, and stated that he assumed that the final destination of his cargo could be somewhere in Sudan.

After comparing and analysing the two incidents: the plane crash in the Central African Republic and the disappearance of the pilot flying from Nigeria, according to the details given in both events and the coincidence of the specifications of the crashed plane with the plane he was flying on and the secrecy of the mission assigned to the pilot, it can be concluded that the two events are closely related and it is likely that the plane crash in the northern Central African Republic is probably linked to the disappearance of the Nigerian pilot.

Sudanese sources also conducted their own investigation, according to which the plane from Nigeria could really go to Darfur, to Sudan. According to Al-Murasil, the pilot who took off from Nigeria told his colleague that the plane that the British handed over to him was loaded with a large amount of weapons, and he was told to deliver it to Darfur, and refueling was planned in Birao. According to what Terry told his colleague Joshua, this trip to Darfur was not his first, since he was assigned the same people to perform this task over and over again. 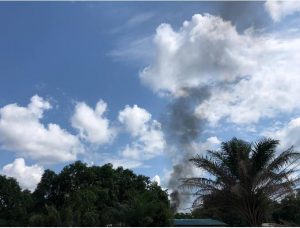