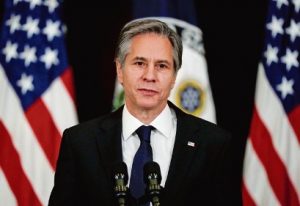 In August, the head of U.S. diplomacy, Anthony Blinken, will visit three African countries, including South Africa, the Democratic Republic of Congo and Rwanda. According to the U.S. State Department, the official purpose of the tour is to show « African countries that they have a critical geostrategic role and are crucial allies on the most pressing issues of our time, from promoting an open and stable international system to addressing the effects of climate change, food insecurity, and global pandemics. »

It is worth recalling that at the end of July, French President Emmanuel Macron also decided to visit the African continent, namely its western part: Cameroon, Benin and Guinea-Bissau. Like the American tour, the official objective of this visit was to discuss economic and agricultural cooperation between the countries. It is worth noting, however, that Western leaders decided to visit Africa almost immediately after Russian Foreign Minister Sergei Lavrov’s visit to the continent. This raises the question: why are the United States and France increasingly interested in African countries?

Clearly, the regularity of these visits indicates that the United States and France are aware of the growing anti-Western sentiment in Africa. France, for its part, does not want to lose its influence in its former colonies, as West African countries choose Russia as their partner. Mali is a clear example of how the conduct of an independent domestic and foreign policy can annoy Paris. Apparently, France, having realized its diplomatic failure in Mali, is trying to maintain its political and military presence in the region in order to continue to exploit the resources of its former colonies.

The United States and China have long been engaged in a trade and economic war in which Washington is increasingly losing ground to Beijing. African countries see China as a reliable partner that, unlike the United States, does not impose its worldview and policies on these countries in exchange for investment.

It is very likely that Macron and Blinken’s visits are an attempt to bribe African countries. At the same time, France continues to make baseless accusations of crimes against the Malian government and army, and Blinken demanded the release of a Rwandan opposition activist upon his arrival in Rwanda. These statements show that France and the United States, along with their allies, have no intention of recognizing the sovereignty of African countries and treating them as equal partners. Perhaps this explains the growing popularity of Russia and China on the continent.