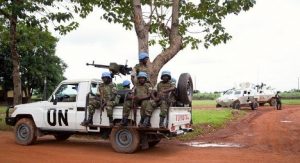 The United Nations Office released a report on Monday July 25, 2022 accusing Central African Republic forces of committing violations in the village of Boyo in Ouaka prefecture.

This report comes just after the death of General of the Unit for Peace in the Central African Republic (UPC), Ousman Abakar alias Sisankeri, on July 3 in Dimbi, in Basse-Koto, as a result of his wounds in combat against elements of the Central African Armed Forces (FACA). Ousman Abakar alias Sisankeri was the right arm of the Chadian-Nigerian mercenary Ali Darassa of the UPC

What is interesting is that Sisankeri was involved in the case of the Boyo massacre on December 2, 2021, according to documents found during the search of General Sisankeri’s home, carried out by the gendarmerie as part of the investigation in Boyo, September 8, 2021.

Shortly after the death of the UPC commander was announced, a United Nations report was released accusing the government of involvement in violations committed in the village of Boyo. The important question remains, if this is true, why was it not announced before? Why didn’t the people of Boyo reveal the affair? on the contrary, they demanded the presence of more FACA forces to protect them from armed groups.

The death of war criminal Ousman Abakar alias Sisankeri, appears to be in the interests of the United Nations and MINUSCA, as he died and could no longer testify on cooperation with MINUSCA. Falsely accusing the government, this is how the UN hides the cooperation of its units with the militants, there is a huge amount of evidence of cooperation between the United Nations Multidimensional Integrated Stabilization Mission in the Central African Republic and Sisankeri. A fact that the United Nations cannot hide, but only diverts public opinion from it.